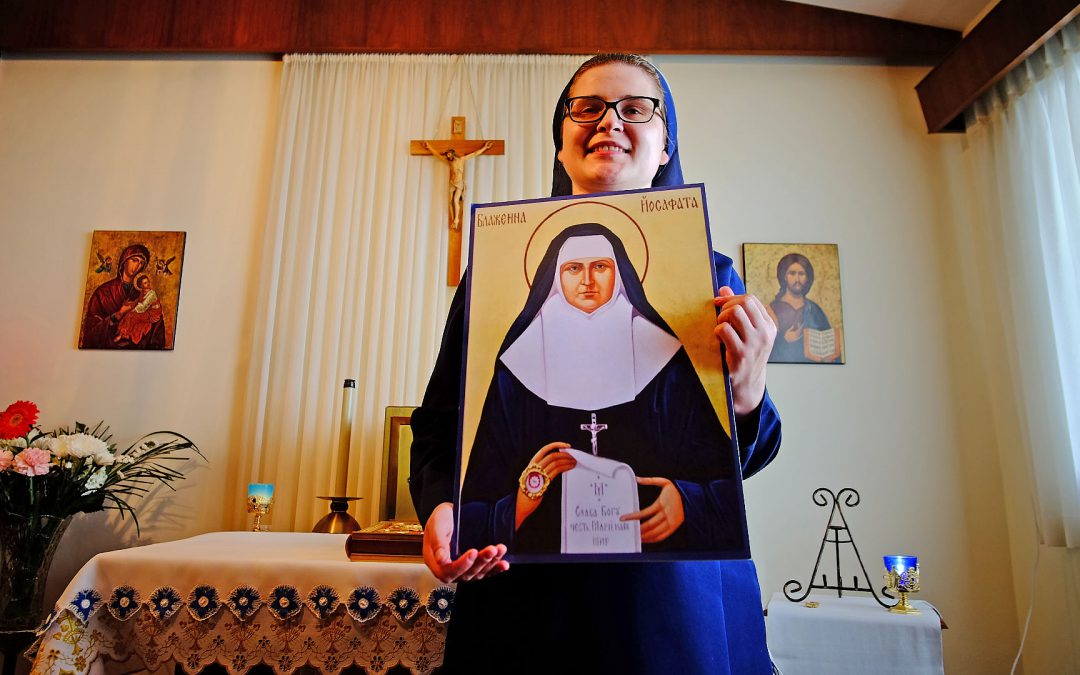 It has been 20 years since the seeds of sisterhood were first planted in Emily Schietzsch.

Reading through a book on the lives of the saints, 12-year-old Emily discovered a world of courageous martyrs, rigorous ascetics, and the pious devotion of consecrated virgins. From that moment her faith was set afire; she desired a life of total devotion to God.

Now at 32, Sister Emily is preparing to profess the final vows that will permanently confirm her as a Sister Servant of Mary Immaculate.

“It’s starting to sink in – I’ll be a Sister forever,” said Schietzsch, who will be the youngest Sister Servant in all of Canada.

“I know that it won’t always be easy, I know I will struggle at times, but I really do want to be God’s forever.” Sister Emily is scheduled to profess her final vows on Aug. 10 at the parish of her childhood — St. Josaphat’s Ukrainian Catholic Cathedral in downtown Edmonton. It’s also the parish where she was first introduced to the religious community she would one day join.

The Sisters Servants of Mary Immaculate (SSMI) are a Ukrainian order founded in 1882, and their presence in Edmonton dates back to 1902. It was their charism of service — in parishes, nursery homes, hospitals, schools and social services —that particularly drew Schietzsch into their mission.

“When I started thinking more seriously about being a sister, I started researching a bunch of communities, but none of them captured my heart quite in the way the Sisters Servants did,” she said. “There was something about being balanced between prayer and service that really captured me. The contemplative tradition didn’t quite speak to me as much; I wanted to be out and among the people serving and helping wherever the need was the greatest.”

In those early teen years Schietzsch grew into a more intimate prayer life and personal relationship with God. As that deeper spiritual life was blossoming, her discovery of the lives of the saints brought her faith to a new level.

“As I got to know God, I wanted to do more for Him,” she said. “Reading the lives of these people who gave up everything for God, I really became enamoured by that.”

“The saints that really stood out to me were the young female martyrs and other women of the early Church that really went against the grain of the society they were living in. Because in the Church today we too have to go against the grain to be persons of faith. To live your faith, you have to have the courage and the vigour that these people did.” A ski instructor before university, Sister Emily enjoys some time with her brother Andrew during a family trip to the Rockies.

“And I knew that being a sister was a far more viable idea than being a martyr,” she added with a laugh.

By age 14, Schietzsch was already feeling certain that God was calling her to sisterhood. Even so, she decided to continue her discernment past high school graduation. She earned a degree in psychology at the University of Alberta and spent a year working with adults with special needs.

But the vision of a life in the blue habit of the Sisters Servants never left her mind, and in 2010, at age 23, she entered the SSMI formation house in Winnipeg for her postulancy and novitiate.

Her decision surprised many of her peers. Some friends were supportive, some who were not religious were shocked and dismayed, and others were worried she was being naïve in taking such a step at a young age. But the support of her parents never waned.

“When I was a shy teenager, my mom would arrange for me to go talk to the sisters at our parish and ask questions,” she said. “My dad would always emphasize ‘If you’re happy, I’m happy. I want what’s best for you.’”

With nine years devoted to sisterhood, it has been a long journey of discernment, prayer and toil. Along with her years of study, daily prayer and meditation, she has worked with the sisters across British Columbia and in Winnipeg and Toronto. 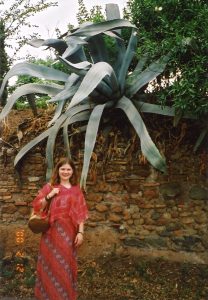 Emily Schietzsch in France during a pilgrimage to Europe before entering her postulancy.

She has served in Winnipeg’s Holy Family Nursing Home, done inner-city ministry with the Yorkton Redemptorists, studied and worked with special needs adults, and has helped archive the sisters’ history at their provincial home in Toronto.

Schietzsch currently serves as an education assistant at the Immaculate Heart of Mary Elementary School in Winnipeg, the last in Canada still run by the Sisters Servants.

Final vows typically come five years after a Sister Servant makes her first vows, but Schietzsch requested an additional sixth year to discern further and pray over her calling. At the time, she was struggling to discern whether she measured up to a life permanently and forever devoted to serving God.

“I think my greatest battles, as they often are, are internal battles,” she said. “There’s always been the fear of ‘Am I enough for God?’ The things, the personality, and everything that goes along with me — is it enough to do this and live this life for God?

“I know God is all loving, all forgiving, and He accepts me as I am even when I don’t accept myself. But there’s one thing with saying that and another thing with actually experiencing and knowing that. I needed that extra time to pray over these doubts and ask God if these thoughts were true.”

That additional time in prayer only reassured her. She came to realize that what mattered most was knowing that God called her to religious life, not whether she felt perfect enough for it.

“That love and desire I had to serve God when I was 12 is still there; it’s maybe a less teenaged version of it, but it’s still there,” she said.

“And I know that God doesn’t call me to be ready, God calls me to come. Jesus said to his disciples ‘Come to me,’ and he says the same to all of us. Even with all of the baggage, all of the gifted and not so gifted parts of myself, He loves and accepts me just as I am.”

She sees her final vows as a reciprocation of that unwavering love:

As the youngest sister in her religious community, Schietzsch knows the reality of declining vocations — particularly in highly secularized countries like Canada. While she may be an anomaly among her age group, she firmly believes that many young people are still being called to religious life. “That desire for truth, life and God is always there in all people,” she said. “It’s just when there’s so many things going on, so many distractions … it’s difficult to find God in this world of turmoil. People have so many options and so many things at their fingertips today, it’s overwhelming. Whether you’re involved with the Church or not, with so many possibilities it’s hard to see God in anything.”

Her advice to anyone trying to discern God’s will in their lives is not only to find time for silence and contemplation outside the hustle of modern life, but also to seek relationships with others that go beyond the artificial and often-isolating world of social media.

“There’s always that barrier in the online world. Now people spend more time with friends online than in person, and it can take away opportunity to really know people heart-to-heart,” said Schietzsch.

“That makes things difficult when it comes to experiencing God too. God cannot be understood through saying ‘Alexa, teach me about God.’ You need that heart-to-heart connection. If you don’t spend that time in prayer, you will never know when God speaks. But if you keep your faith, keep looking and keep knocking, God will find a way.”

She is looking forward to returning to her roots and celebrating her final vows in the church of her childhood. Sister Emily during her daily work as an education assistant at the Immaculate Heart of Mary Elementary School in Winnipeg.

“It’s quite unique in this day and age to have a celebration of final vows. It’s not something people see all the time,” she said. “I want to celebrate this not just with my sisters, but with my whole church family. The best way to do that is in the parish where I grew up.”