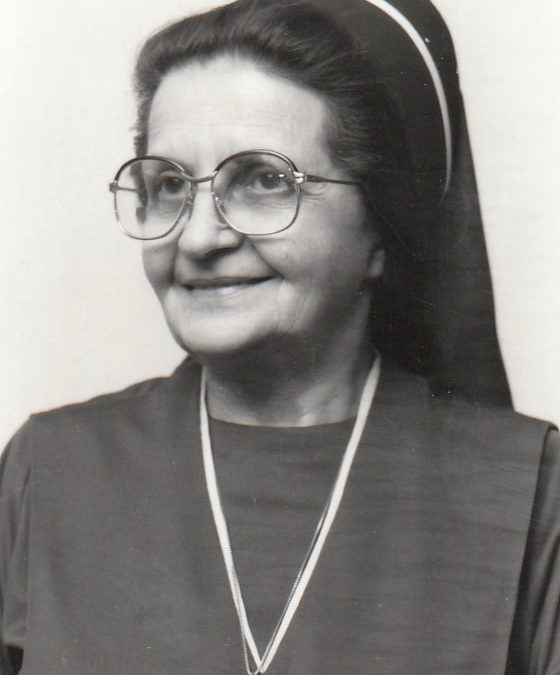 Sister Irene passed away August 1, 2018 at the Mary Immaculate Health Care Centre, Mundare.  She was 95 years of age, and 76 years in religious life.

Miroslawa was born on August 13, 1923, in Kryvorivnia, Ukraine, daughter of Savaryn and Barbara (nee Mykolajewich), and sister to Ivanna and Bohdanna.   She entered the Congregation of the Sisters Servants of Mary Immaculate in Krystynopil, Western Ukraine, on December 12, 1942.  She was accepted to the novitiate on July 13, 1943, taking the religious name, Irene.  She made her first profession of vows on June 14, 1945, During her novitiate, in Krystynopil, she was present during the Russian occupation, when Blessed Martyr Tarsykia Matskiv was martyred.

For the years of her temporary profession, Sister Irene worked as a lab/x-ray technician.  She made her final profession August 28, 1951, and continued her ministry with home care and sacristan duties.  In 1958, with the help of her father, who had immigrated to Canada earlier, she arrived in Toronto, and was included in the membership of the Canadian Province of Christ the King.  She was missioned in Edmonton, Toronto, Ancaster, Winnipeg, Yorkton, Dauphin and Mundare.  Her longest mission was in Dauphin, where she was director of Recreational Activities for the residents of St. Paul’s Seniors Home.  Having retired at St. Joseph’s Home in Mundare, she still took active care of Sisters in greater need, and offered pastoral care in the local hospital and seniors lodges.  In 2015, her own health needs took priority, and she was transferred to Mary Immaculate Health Care Centre, for long term care, where she still kept an active ministry of prayer.  Sister Irene will be remembered for her faithfulness to the community and to her vows, and for her gratitude for all the opportunities she was given. She edified others with her fervor for God’s will, and her ministry of prayer, even in her final years, when her mobility was limited.  She remained astute, in touch with the issues of the world, and eager to pray for the conversion of sinners, particularly those in the public eye.

Sister Irene was predeceased by her parents, Savaryn and Barbara; and her sisters, Ivanna and Bohdanna.  Survived by nephew, Orest Gulka and wife Halia, and their children, Taras and Okasana (John) Roma, great-nephew, Mark and great niece, Mila; and extended family in Ukraine.  She will be deeply missed by her SSMI community.

May the memory of Sister Irene be eternal!

In lieu of other tributes, donations may be made to St. Joseph’s Home.
Photos, memories and condolences may be shared through www.parkmemorial.com