A gentle breeze offered by the Holy Spirit: Sub-deacons ordination in Calgary 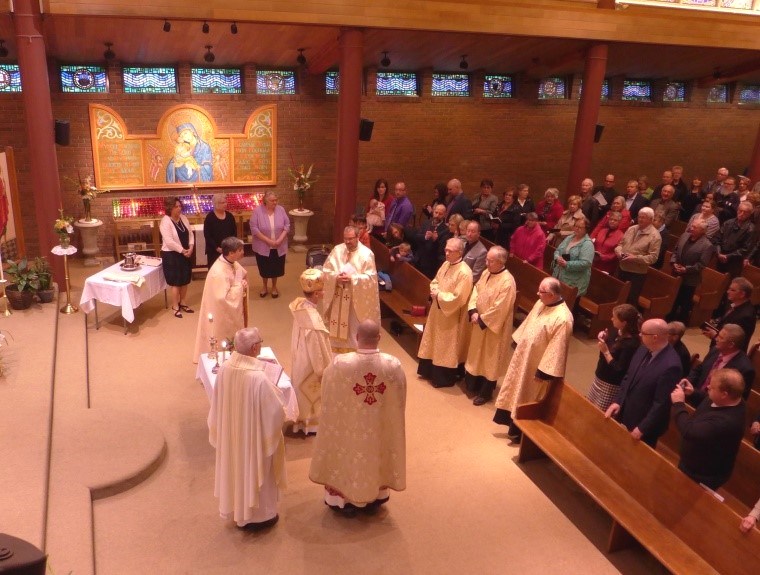 When we arrive at church and look towards the sanctuary, where the holy altar is located, we’re accustomed to seeing priests and deacons, lectors and altar servers, and at times even a bishop or two praying and processing. So, what’s with the new guys with the X’s on their backs? Well, quite simply the sub-deaconate has arrived in Calgary. Traditionally, everyone who enters the sanctuary during a time of prayer should have been ordained by the bishop and received a special grace, to perform a specific role in a minor or major order.  The major orders, addressed by and administered according to Canon Law, include the deaconate, priesthood, and the episcopacy. The minor orders in ascending rank include acolytes (altar servers), cantors, lectors, and sub-deacons. The minor orders are also addressed by Canon Law but to a much lesser degree than the major orders.

A sub-deacon organizes the needs of the bishop, priest, or deacon during the Divine Liturgy and other services. His role is most obvious when the bishop is present, at which time he acts as the eparch’s assistant and, by the cleansing of hands, prepares him for the consecration. Sub-deacons can also be assigned particular responsibilities by the parish priest.

At St. Stephen Protomartyr Ukrainian Catholic parish, sub-deacons prepare the altar and preparation table (proskomedia) before the 8:30 and 10:30 Sunday morning Divine Liturgies, giving Fr. Greg Faryna time to hear confessions from the top of the hour to 10 minutes before the start of the service. They also assist Father Greg with organizing the distribution of the Eucharist. This latter role will become even more necessary with the imminent introduction of extraordinary ministers of the Eucharist. Our lectors will continue to carry out the role they currently have but will also help the new ministers when the time comes.

Calgary and the surrounding area have three new sub-deacons to serve the Ukrainian Catholic community in that region. Bill Lewchuk, David Shewchuk, and Allan Oryschak took on the mantle of this ministry with the ordination by Bishop David Motiuk on Sunday, April 29 at St. Stephen Protomartyr Ukrainian Catholic Church. “Altar service has been a long-term connection for me,” notes sub-deacon Allan. The Oryschaks come from Regina, Saskatchewan. Because of work and university training commitments (Dr. Oryschak is Clinical Associate Professor of Pathology in the University of Calgary Department of Pathology and Laboratory Medicine and Sharon was completing a Masters program in nursing at the time), the Oryschaks chose to live in the area of the Rockview Hospital.

The closest church to their home, they discovered, was St. Stephen’s Promotmartyr. Father Bill Hupalo came across them in the parking lot and “invited us to join the parish and the rest is history.”

Since the summer of 1986, the entire family, sons Matthew, Jon and Daniel and daughters Breanne and Sarah, has been actively involved in the parish. Sub-deacon Oryschak’s sons undertook the responsibility of altar servers, as their father had in Saskatchewan many years ago.

In 2005, Allan was ordained a lector by then-bishop Lawrence Huculak and served in that capacity until his recent ordination to sub-deacon.

“The idea of sub-deaconate came from Patriarch Sviatoslav during his visit to Calgary,” explains Allan. “Several of us had spoken with him, when he noted that we were doing the work of sub-deacons. After a period of discernment and Father Greg’s encouragement and guidance, fellow parishioners Bill Lewchuk, Dave Shewchuk and I decided to approach Bishop David about ordination. He promptly approved.

“I look forward to continuing service to the parishioners of St. Stephen’s and pray for our parish to fulfil its mission,” Allan concludes. Bill and Theresa moved to Calgary in late 1989 and became parishioners of St. Stephen’s in 1992.  They have been married for 43 years, have two married daughters, Krista and Lisa, and two grandsons.

Bill’s service to the parish community includes member and executive positions in the Parish Pastoral Council, membership in the Eparchial Pastoral Council since its inception, being instrumental in establishing the Ark Store and becoming a Grand Knight in 1995 for the Knights of Columbus. He has been financial advisor for the Knights since 1996. Bill was ordained lector in 1993.

Asked about why he chose ordination to the sub-diaconate, Bill says: “I think that what it comes down to is that I have been led by the Holy Spirit to move in this direction, to serve our Lord in a more concrete way. It was a gentle breeze offered by the Holy Spirit through the words of three separate members of the clergy that moved me.

“I believe that the Holy Spirit sometimes whispers to us. On occasion the whispers are louder than at other times.  Within the last several months I had the opportunity to discuss vocations with Fr. Stephen Wojcichowsky during his presentation at a parish mission.  He asked if I had considered vocations considering what I currently do in the parish.

“Then at the recent ordination of Fr. Andij Nykyforuk, I was able to spend some time with Fr. Michael Winn, Rector of the Holy Spirit Seminary, when the topic of personal vocations came up.

“Finally, at the One Rock Concert in Calgary last year, I ‘bumped into’ newly-ordained Fr. Adrian Martens whom I have known for some time.  His question to me was the same as those uttered by Fathers Stephen and Michael: “Why don’t you take a more serious step towards vocations?”  Three times in less than one year is too much to ignore.  It is more than a quiet whisper.” Dave was born in Toronto and raised in Edmonton, attending St. Josaphat’s Cathedral.  He assisted at the altar between the ages of six and 18 years.

In 1971, he moved to Calgary and joined St. Stephen’s parish which was celebrating Divine Liturgies in the Knights of Columbus Hall with Father Martin Greschuk.

Dave has served in various parish council positions. He became a charter member of the Knights of Columbus St. Nicholas Council #7659 in 1980.  “With St. Stephen’s becoming a growing parish in the early 1990’s, Fr. Rendy Yakimets suggested I become a lector to assist in the distribution of the Holy Eucharist.

I was ordained a Lector November 21, 1993.  I feel the call to dedicate myself to the worship of God and the service of the Church and will continue to do this in the capacity of sub-deacon at St. Stephen’s.”