THE DORMITION OF THE MOST-HOLY BIRTH-GIVER OF GOD 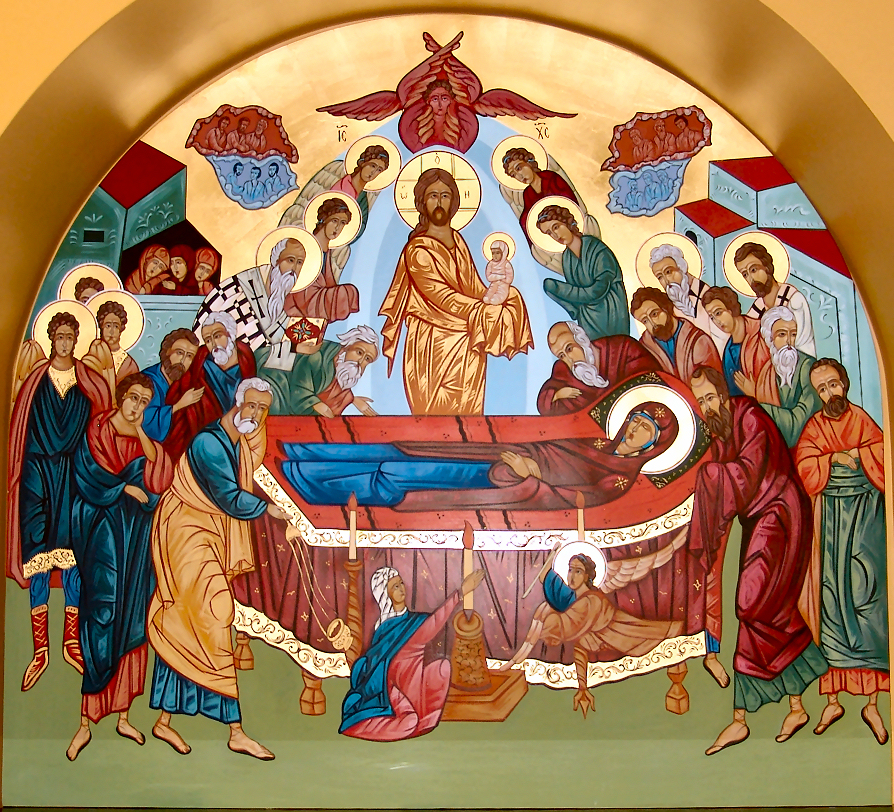 The Lord Who, on Mt. Sinai, commanded by His Fifth Commandment: “Honor your father and your mother” (Exodus 20:12), showed by His own example how one should respect one’s parent. Hanging on the Cross in agony, He remembered His mother and indicating to the Apostle John, said to her: “Woman behold your son” (St. John 19:26). After that, He said to John: “Behold your mother” (St. John 19:27). And so providing for His mother, He breathed His last. John had a home on Zion in Jerusalem in which the Theotokos settled and remained there to live out the end of her days on earth.

By her prayers, gentle counsels, meekness and patience, she greatly assisted the apostles of her Son. Primarily, she spent her entire time in Jerusalem often visiting those places which reminded her of the great events and of the great works of her Son. She especially visited Golgotha, Bethlehem and the Mount of Olives. Of her distant journeys, her visit to St. Ignatius the Theophorus [God-bearer] in Antioch is mentioned, as well as her visit to Lazarus (whom our Lord resurrected on the fourth day), the Bishop of Cyprus, her visit to the Holy Mountain [Athos] which she blessed and her stay in Ephesus with St. John the Evangelist [The Theologian] during the time of the great persecution of Christians in Jerusalem. In her old age, she often prayed to the Lord and her God on the Mount of Olives, the site of His Ascension, that He take her from this world as soon as possible.

On one occasion, the Archangel Gabriel appeared to her and revealed to her that within three days she will find repose. The angel gave her a palm-branch to be carried at the time of her funeral procession. She returned to her home with great joy, desiring in her heart once more to see in this life, all of the apostles of Christ. The Lord fulfilled her wish and all of the apostles, borne by angels in the clouds, gathered at the same time at the home of John on Zion. With great rejoicing, she saw the holy apostles, encouraged them, counseled them and comforted them. Following that, she peacefully gave up her soul to God without any pain or physical illness.

The apostles took the coffin with her body from which an aromatic fragrance emitted and, in the company of many Christians, bore it to the Garden of Gethsemane to the sepulchre of [her parents], Saints Joachim and Anna. By God’s Providence, they were concealed from the unbelieving Jews by a cloud. Anthony, a Jewish priest, grabbed the coffin with his hands with the intention of overturning it but, at that moment, an angel of God severed both his hands. He then cried out to the apostles for help and was healed since declaring his faith in the Lord Jesus Christ. The Apostle Thomas was absent, again according to God’s Providence, in order that a new and all-glorious mystery of the Holy Theotokos would again be revealed. On the third day, Thomas arrived and desired to venerate [kiss] the body of the Holy All-pure one. But when the apostles opened the sepulchre, they found only the winding sheet and the body was not in the tomb. That evening, the Theotokos appeared to the apostles surrounded by a myriad of angels and said to them: “Rejoice, I will be with you always”. It is not exactly known how old the Theotokos was at the time of her Falling Asleep but the overwhelming opinion is that she was over sixty years of age.

From the Ochrid Prolog