FASTING WITH THE APOSTLES 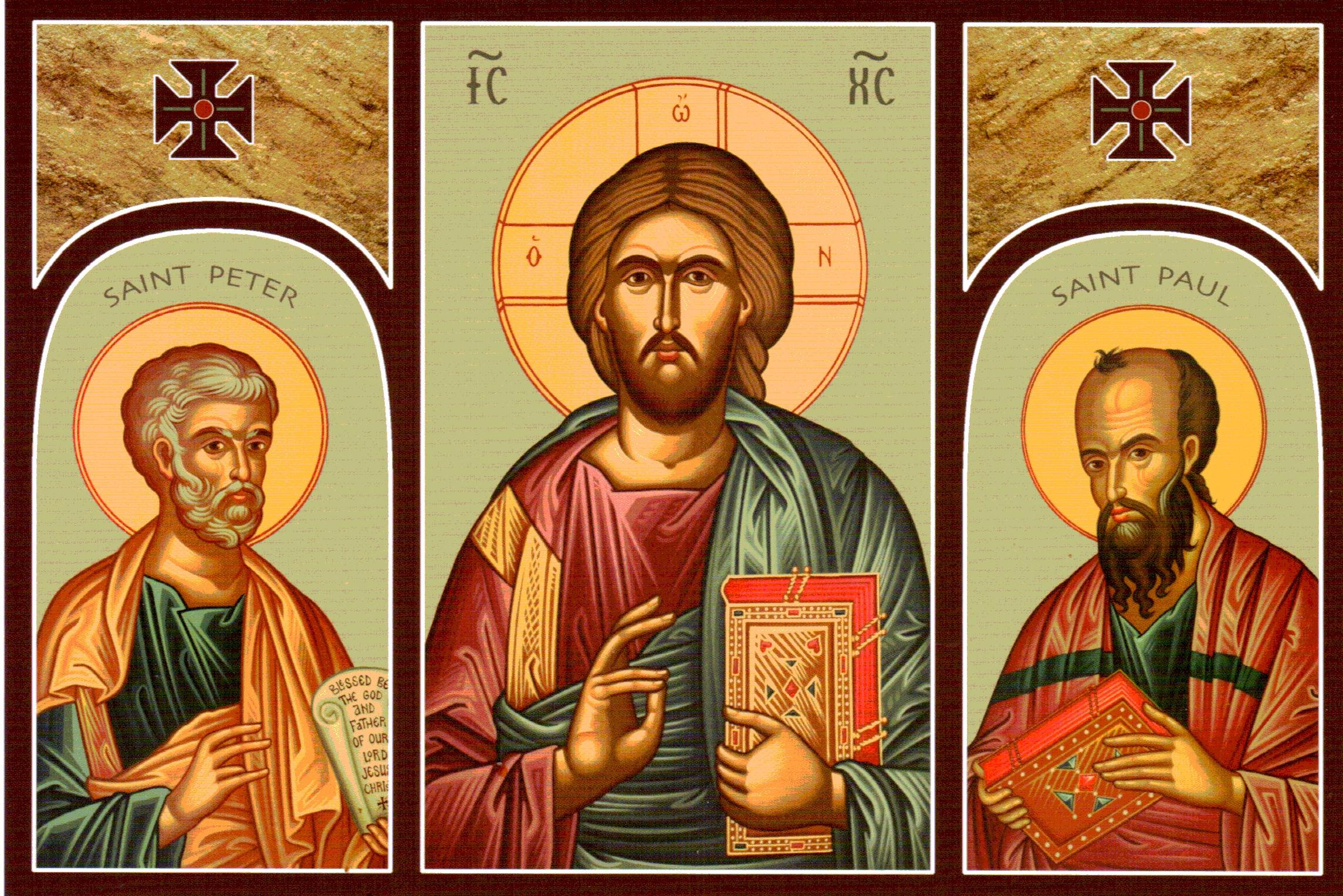 “AFTER THE LONG FEAST OF PENTECOST, fasting is especially necessary to purify our thoughts and render us worthy to receive the Gifts of the Holy Spirit … Therefore, the salutary custom was established of fasting after the joyful days during which we celebrated the resurrection and ascension of our Lord, and the coming of the Holy Spirit” (from a sermon of Pope St. Leo the Great, +461).
The fifty days of feasting from Pascha to Pentecost is followed by a time of fasting which we call the Fast of the Apostles. The first evidence of this fast is found in the writings of the fourth century Fathers, Saints Athanasius the Great of Alexandria and St. Ambrose of Milan. In a letter to his friend and supporter, Emperor Constans, St Athanasius describes the practice of the Alexandrian Church: “During the week following Pentecost, the people who observed the fast went out to the cemetery to pray.”

Some 20 years later, St. Ambrose (+397) writes about the practice in his diocese: “The Lord so ordained it that as we have participated in His sufferings during the Forty Days, so we should also rejoice in His Resurrection during the season of Pentecost. We do not fast during the season of Pentecost since our Lord Himself was present amongst us during those days … Christ’s presence was like nourishing food for the Christians. So too, during Pentecost, we feed on the Lord who is present among us. On the days following His ascension into heaven, however, we again fast” (Sermon 61).
This fast was first seen as a resumption of fasting following the Paschal season. During the fifty days of Pascha we have celebrated Christ’s resurrection, then His ascension and finally the sending forth of the Holy Spirit upon the disciples. We have feasted while celebrating the presence of the risen Christ, but now it is time to return to the more everyday practice of Christians.

The struggle to be what we have become, to “put on Christ,” demands a lifelong effort of prayer, fasting and almsgiving. We observe times to celebrate the mysteries of Christ among us – the Lord’s Day and the Great Feasts on which we do not fast. But these are respites from the more ordinary Christian practice of fasting. As the Lord said when asked by the disciples of John the Baptist and the Pharisees why His disciples were not fasting, “As long as they have the bridegroom with them they cannot fast. But the days will come when the bridegroom will be taken away from them, and then they will fast in those days” (Mark 2:19-20).
Contents [hide]

WHEN DOES THIS FAST BEGIN?
It appears that in the fourth and fifth centuries this fast began on the day after Pentecost, the last day of the feast. This is still the custom in the Armenian Church which fasts for the week of Pentecost. Something of this practice survives in our custom of the “kneeling prayers” offered at vespers on the afternoon of Pentecost. With these prayers kneeling is resumed as the common practice of prayer which had been suspended during the paschal feast.

Later Pentecost was extended to last one week. As a result this Fast begins on the day following the Sunday of All Saints, the octave of Pentecost. As St. Symeon of Thessalonica, wrote in the fifteenth century: “For one week after the descent of the Holy Spirit, in accordance with the Apostolic Constitution composed by Clement, we celebrate, and then during the following week, we fast in honor of the Apostles.”

HOW LONG DOES THIS FAST LAST?
As Symeon noted, this season, which began as a simple resumption of fasting after Pentecost, was later emphasized in connection with the apostles, particularly with the establishment of the feast of the principal apostles, Ss. Peter and Paul, on June 29. In the ordinary Byzantine and Coptic practice, the Fast lasts from the second Monday after Pentecost to June 28, the eve of the apostles’ feast. This means that the Fast may last for only a few days or may last four or five weeks, depending on the date of Pascha in any given year.
This Fast is not kept with the same rigor as the Great Fast or even the Dormition Fast. In Greek and Slavic practice full fasting is prescribed only on certain days during this period. On other days fish, wine and oil are permitted.

In the Middle East the Fast has come to be associated more with the apostles rather than with Pentecost. The Syriac – and until recently the Maronite – Churches observed this fast for four days, from June 25 to 28. The thirteenth-century Melkite Patriarch of Antioch, Balsamon, insisted on a seven day fast. Today the Melkite Church prescribes a ten-day fast, beginning on June 19.

KEEPING THIS FAST TODAY
This Fast is sometimes described as a remembrance of the hardships endured by the apostles in proclaiming the Gospel throughout the world. St Paul, writing to the Corinthians, dramatically outlined some of the difficulties he endured during his ministry. “From the Jews five times I received forty stripes minus one. Three times I was beaten with rods; once I was stoned; three times I was shipwrecked; a night and a day I have been in the deep;  in journeys often, in perils of waters, in perils of robbers, in perils of my own countrymen, in perils of the Gentiles, in perils in the city, in perils in the wilderness, in perils in the sea, in perils among false brethren;  in weariness and toil, in sleeplessness often, in hunger and thirst, in fastings often, in cold and nakedness— besides the other things, what comes upon me daily: my deep concern for all the churches” (2 Corinthians 11:24-28). To be sure, each of the apostles could tell similar tales.

The Churches established by the apostles in the Middle East are sharing in their sufferings once more. Christians in Egypt, Iran, Iraq, Israel, Syria .and elsewhere in Asia and Africa are enduring renewed assaults from Hindu, Islamic and Jewish fundamentalists as well as from the Communist regimes in the Far East. Persecution of Christians in Afghanistan, Algeria, Azerbaijan, China, India, Indonesia, Libya, Nigeria, North Korea, Mali, Pakistan, the Philippines, Sudan, Tanzania and Turkey is reported almost daily. This Fast is a particularly appropriate time to pray for our suffering brethren in these countries.
You might chose to express your solidarity with the persecuted Churches abroad by adding the following prayer to your Lenten meals each day of the Fast.

A PRAYER FOR THOSE SUFFERING PERSECUTION
Lord, bring an end to tragedy and suffering. Deliver Your Church and Your faithful people from every evil with Your mighty hand. Help us, O God, for You were crucified and died for the salvation of all. Help us, that among us, and in all the world, hatred may be replaced with love, unrest may be replaced with peace, and sorrow may be replaced with happiness, that we have a peaceful life as Your people and live as brothers and sisters with one another.

Remember our enemies, those who hate us and oppress us, and repay them not according to their deeds, but rather give them reason and understanding, according to Your great mercy, so that they may see that evil cannot bring good.

You are the God of mercy, goodness and the Lover of mankind, and unto You we ascribe glory, to the Father and to the Son and to the Holy Spirit, now and ever and unto ages of ages. Amen.

According to the decisions of the Episcopal Synods of the Ukrainian Greco-Catholic Church,  the ‘minimal’ prescriptions regarding fasting are the following:
(Note: the ‘traditional’ fasting discipline of our Church – which is encouraged as an ideal to strive toward, is given italicized and in brackets)

1) To abstain from meat on all Fridays of the year except:
(Note: ‘traditionally’ all Wednesdays are also days of fast)
a) a feast of the Lord or the Mother of God falls on a Friday, or
b) during the so-called ‘zahalnytsi’, that is, special periods when we do not fast.
These periods are:
i) The period from Christmas to Theophany
ii) From the Sunday of the Publican and Pharisee to the Sunday of the Prodigal Son
iii) From Pascha (Easter Sunday) to Thomas Sunday (Bright Week)
iv) From Pentecost to the following Sunday of All Saints.

2) To abstain from meat and dairy products on the first day of Lent and on Good Friday
(Note: ‘traditionally’ all days of the Great Fast and Holy Week – including Saturdays and Sundays – exclude meat and diary products; the first week of the Great Fast and Holy Week are strictly observed)
3) To abstain from meat products (dairy products may be consumed) – according to local customs – on the following days:
(Note: ‘traditionally’ dairy products are not consumed on these days)

i) The eves of Christmas, December 24 and Theophany, January 5
ii) Universal Exaltation of the Precious and Life-creating Cross, September 14
iii) Beheading of Saint John the Baptist, August 29.

While the prescriptions for fasting listed above constitute a kind of ‘minimum’ requirement for Ukrainian Greco-Catholics, all Eastern Christians are encouraged to observe – to the best of their abilities – the following traditional periods of fasting:

The Fast of the Holy Apostles:
The Apostles fast is observed from sundown on All Saints Sunday through June 29th, the Holy Church Canons state that similar to the Nativity fast, the Fast of the Holy Apostles sees abstinence from meat, dairy and their by-products on all days. Fish, shellfish, oil, wine, fruit and vegetables are allowed on all days except Monday, Wednesdays and Fridays.

Traditionally, the Church Fathers recommend that someone new to fasting begin by resolving to faithfully do as much as he or she is able during the Lenten period. The hope is that every year as we grow and mature in our faith we also enter into a fuller participation of Christian discipline—prayer, fasting and almsgiving (charitable works)—however, it is not recommended that a person try to create their own rules of fasting, since this would not be obedient or wise. Faithful are encouraged to consult with their priest or bishop regarding the fast whenever possible.

Personal factors such as one’s health and living situation need to be considered as well. For example, an isolated Christian required to eat meals at their place of employment, school or in prison may not be able to avoid certain foods. The Church understands this, extends leniency and always encourages charity in all situations.

It is important to keep in mind that fasting is not a law for us—rather it is a voluntary humbling discipline that helps us to recall that we are to struggle against sin and evil. When fasting is coupled with prayer, repentance and acts of charity it opens us to the grace of God, which strengthens us and enables us to be victorious against our passions, temptations, sins and evil. As Christians we must always remember that we “are not under the law but under grace” (Romans 6:14); for this reason we strive to grow in grace at all times, and all place, for the sake of the salvation of our neighbour and ourselves.

Everyone is encouraged to do the best they can. Offering up even a little in acknowledgment of the fast will return to us immense spiritual blessings and strengthen us in our journey towards the heavenly kingdom.

May you have a blessed and fruitful Apostles fast.