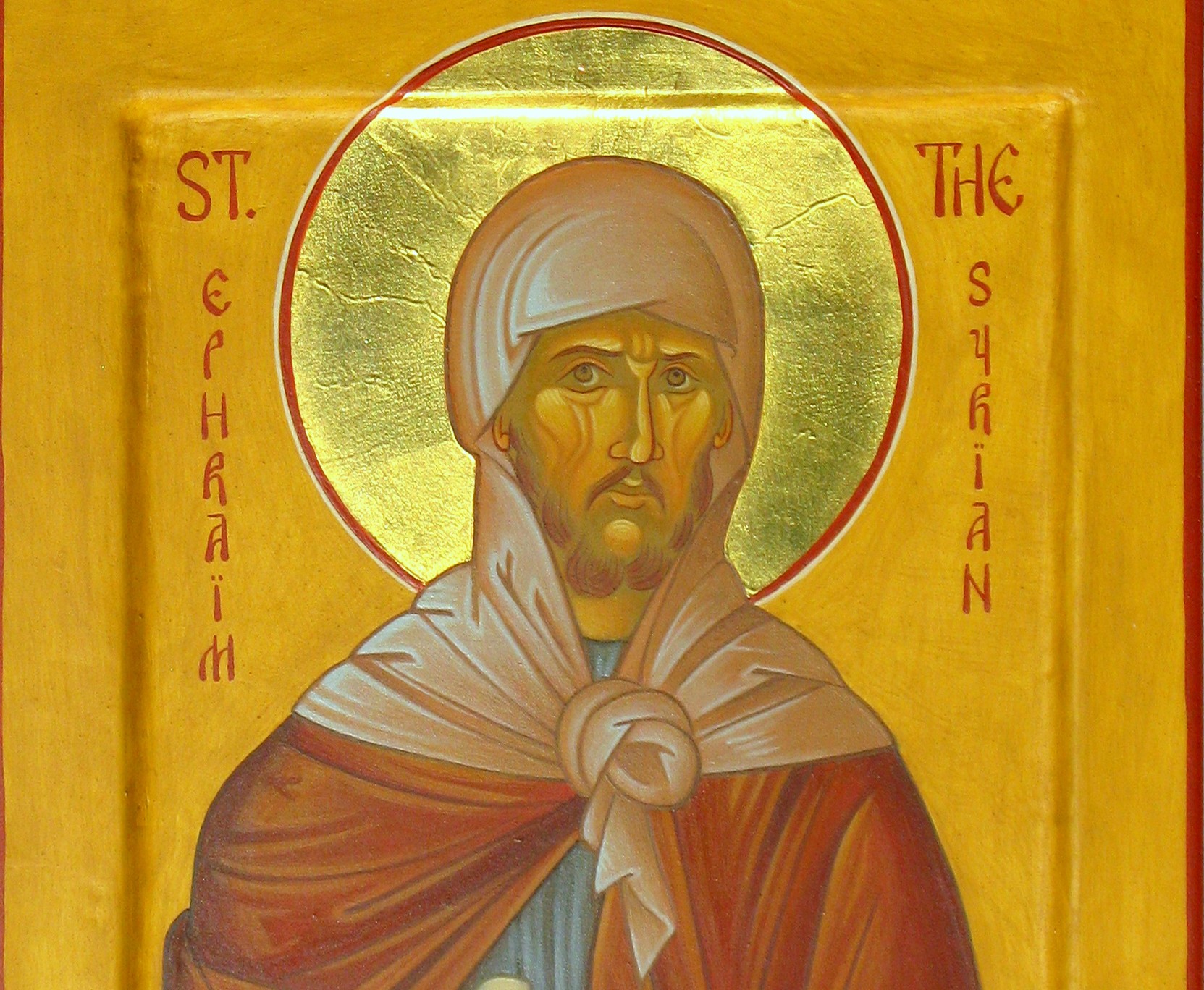 PRAYER OF SAINT EPHREM THE SYRIAN

O Lord and Master of my life, drive from me the spirit of indifference, despair, lust of power and idle chatter. (Prostration).

Instead, bestow on me, your servant, the spirit of chastity, humility, patience and love. (Prostration).

Yes, O Lord and King, let me to see my own sins and not judge my brothers and sisters; for you are blessed, for ever and ever. Amen. (Prostration).

Then, with a simple bow, the following is repeated four times:

God, be merciful to me, a sinner. God, cleanse me of my sins and have mercy on me. I have sinned without number, forgive me, O Lord.

The Prayer of Saint Ephraim is said once more in its entirety, with one final prostration at the completion.

The Lenten Prayer of St Ephrem the Syrian, by Protopresbyter Alexander Schmemann

Of all lenten hymns and prayers, one short prayer can be termed  the lenten prayer. Tradition ascribes it to one of the great teachers of spiritual life – St. Ephrem the Syrian. Here is its text:

O Lord and Master of my life! Take from me the spirit of sloth, faint-heartedness, lust of power, and idle talk.  But give rather the spirit of  chastity, humility, patience, and love to Thy servant. Yea, O Lord and King! Grant me to see my own errors and not to judge my brother; For Thou art blessed unto ages of ages. Amen

This prayer is read twice at the end of each lenten service Monday through Friday (not on Saturdays and Sundays for, as we shall see later, the services of these days do not follow the lenten pattern). At the first reading, a prostration follows each petition. Then we all bow twelve times saying: “O God, cleanse me a sinner.” The entire prayer is repeated with one final prostration at the end.

Why does this short and simple prayer occupy such an important position in the entire lenten worship? Because it enumerates in a unique way all the “negative” and “positive” elements of repentance and constitutes, so to speak, a “check list” for our individual lenten effort. This effort is aimed first at our liberation from some fundamental spiritual diseases which shape our life and make it virtually impossible for us even to start turning ourselves to God.

The basic disease is sloth. It is that strange laziness and passivity of our entire being which always pushes us “down” rather than “up” — which constantly convinces us that no change is possible and therefore desirable. It is in fact a deeply rooted cynicism which to every spiritual challenge responds “what for?” and makes our life one tremendous spiritual waste. It is the root of all sin because it poisons the spiritual energy at its very source.

The result of  sloth is faint-heartedness. It is the state of despondency which all spiritual Fathers considered the greatest danger for the soul. Despondency is the impossibility for man to see anything good or positive; it is the reduction of everything to negativism and pessimism. It is truly a demonic power in us because the Devil is fundamentally a liar. He lies to man about God and about the world; he fills life with darkness and negation. Despondency is the suicide of the soul because when man is possessed by it he is absolutely unable to see the light and to desire it.

Lust of power! Strange as it may seem, it is precisely sloth and despondency that fill our life with lust of power. By vitiating the entire attitude toward life and making it meaningless and empty, they force us to seek compensation in, a radically wrong attitude toward other persons. If my life is not oriented toward God, not aimed at eternal values, it will inevitably become selfish and self-centered and this means that all other beings will become means of my own self-satisfaction. If God is not the Lord and Master of my life, then I become my own lord and master — the absolute center of my own world, and I begin to evaluate everything in terms of my needs, my ideas, my desires, and my judgments. The lust of power is thus a fundamental depravity in my relationship to other beings, a search for their subordination to me. It is not necessarily expressed in the actual urge to command and to dominate “others.” It may result as well in indifference, contempt, lack of interest, consideration, and respect. It is indeed sloth and despondency directed this time at others; it completes spiritual suicide with spiritual murder.

Finally, idle talk. Of all created beings, man alone has been endowed with the gift of speech. All Fathers see in it the very “seal” of the Divine Image in man because God Himself is revealed as Word (John, 1:1). But being the supreme gift, it is by the same token the supreme danger. Being the very expression of man, the means of his self-fulfillment, it is for this very reason the means of his fall and self-destruction, of betrayal and sin. The word saves and the word kills; the word inspires and the word poisons. The word is the means of Truth and it is the means of demonic Lie. Having an ultimate positive power, it has therefore a tremendous negative power. It truly creates positively or negatively. When deviated from its divine origin and purpose, the word becomes idle. It “enforces” sloth, despondency, and lust of power, and transforms life into hell. It becomes the very power of sin.

These four are thus the negative “objects” of repentance. They are the obstacles to be removed. But God alone can remove them. Hence, the first part of the lenten prayer; this cry from the bottom of human helplessness. Then the prayer moves to the positive aims of repentance which also are four.

Chastity! If one does not reduce this term, as is so often and erroneously done, only to its sexual connotations, it is understood as the positive counterpart of sloth. The exact and full translation of the Greek sofrosini and the Russian tselomudryie ought to be whole-mindedness. Sloth is, first of all, dissipation, the brokenness of our vision and energy, the inability to see the whole. Its opposite then is precisely wholeness. If we usually mean by chastity the virtue opposed to sexual depravity, it is because the broken character of our existence is nowhere better manifested than in sexual lust — the alienation of the body from the life and control of the spirit. Christ restores wholeness in us and He does so by restoring in us the true scale of values by leading us back to God.

The first and wonderful fruit of this wholeness or chastity is humility. We already spoke of it. It is above everything else the victory of truth in us, the elimination of all lies in which we usually live. Humility alone is capable of truth, of seeing and accepting things as they are and therefore of seeing God’s majesty and goodness and love in everything. This is why we are told that God gives grace to the humble and resists the proud.

Chastity and humility are naturally followed by patience. The “natural” or “fallen” man is impatient, for being blind to himself he is quick to judge and to condemn others. Having but a broken, incomplete, and distorted knowledge of everything, he measures all things by his tastes and his ideas. Being indifferent to everyone except himself, he wants life to be successful right here and now. Patience, however, is truly a divine virtue. God is patient not because He is “indulgent,” but because He sees the depth of all that exists, because the inner reality of things, which in our blindness we do not see, is open to Him. The closer we come to God, the more patient we grow and the more we reflect that infinite respect for all beings which is the proper quality of God.

Finally, the crown and fruit of all virtues, of all growth and effort, is love — that love which, as we have already said, can be given by God alone-the gift which is the goal of all spiritual preparation and practice.

All this is summarized and brought together in the concluding petition of the lenten prayer in which we ask “to see my own errors and not to judge my brother.” For ultimately there is but one danger: pride. Pride is the source of evil, and all evil is pride. Yet it is not enough for me to see my own errors, for even this apparent virtue can be turned into pride. Spiritual writings are full of warnings against the subtle forms of pseudo-piety which, in reality, under the cover of humility and self-accusation can lead to a truly demonic pride. But when we “see our own errors” and “do not judge our brothers,” when, in other terms, chastity, humility, patience, and love are but one in us, then and only then the ultimate enemy–pride–will be destroyed in us.

After each petition of the prayer we make a prostration. Prostrations are not limited to the Prayer of St. Ephrem but constitute one of the distinctive characteristics of the entire lenten worship. Here, however, their meaning is disclosed best of all. In the long and difficult effort of spiritual recovery, the Church does not separate the soul from the body. The whole man has fallen away from God; the whole man is to be restored, the whole man is to return. The catastrophe of sin lies precisely in the victory of the flesh — the animal, the irrational, the lust in us — over the spiritual and the divine. But the body is glorious; the body is holy, so holy that God Himself “became flesh.” Salvation and repentance then are not contempt for the body or neglect of it, but restoration of the body to its real function as the expression and the life of spirit, as the temple of the priceless human soul. Christian asceticism is a fight, not against but for the body. For this reason, the whole man – soul and body  – repents. The body participates in the prayer of the soul just as the soul prays through and in the body. Prostrations, the “psycho-somatic” sign of repentance and humility, of adoration and obedience, are thus the lenten rite par excellence.