THE LORD MANIFESTED IN THE JORDAN 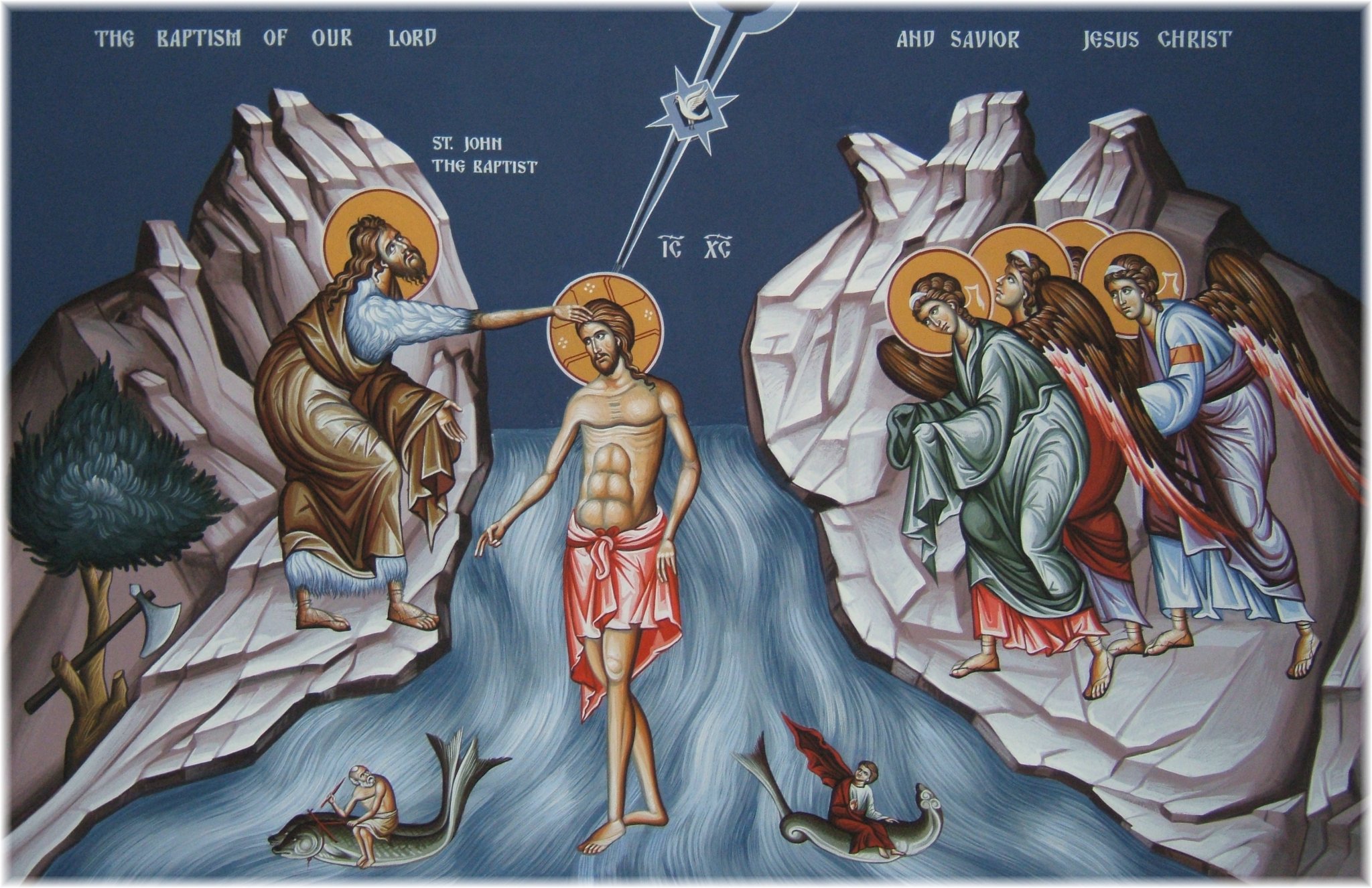 “THE HOLY DAY OF THE LIGHTS to which we have come, and which we are celebrating today, has for its origin the Baptism of my Christ, the True Light that lightens everyone who comes into the world, and effects my purification…” These words, which begin St Gregory the Theologian’s homily “on the Lights,” reflect what was already a well-known custom when he spoke them (AD 381). They also point to the reason why this is an especially appropriate term for this feast of the Theophany.

It has been suggested that the feast was introduced in third century Alexandria, where January 6 was observed by the pagans as the birthday of Aeon, the patron god of the city. By the fourth century it was observed in Jerusalem and it was not long before this feast was kept throughout the East.
At first the feast observed the theophanies of God at Christ’s birth, at His baptism and at His first miracle at Cana. Eventually the Western date of December 25 was adopted in the East for the remembrance of the Nativity and January 6 for the theophany at His baptism. To this day, however, the Armenian Church celebrates both manifestations on January 6.
WHY LIGHTS?
One explanation, mentioned in some synaxaria, is offered by Seberian, Bishop of Gavalon. He remarks that in the Church there was great abundance of light on this feast day because the Christians carried lighted candles. The same is mentioned by Ephraim the Syrian in his hymn on the Epiphany (9th verse). The ceremony in Jerusalem, as described by the 4th century pilgrim Egeria began with a procession during the night from Bethlehem to the Church of the Resurrection in Jerusalem. They enter the church before daybreak “where an exceedingly great number of lights are already burning.”

The theme of light resounds on this feast because light frequently represents the divine in the Scriptures. The most evocative for Christians is found in the Gospel of John where the Lord says “I am the light of the world. He who follows Me shall not walk in darkness, but have the light of life” (John 8:12).

St Gregory in his homily links a number of the Scriptural verses on light. “Therefore listen to the Voice of God, which sounds so exceeding clearly to me, who am both disciple and master of these mysteries, as would to God it may sound to you: “I am the Light of the world” [John 8:12] Therefore “approach Him and be enlightened, and let not your faces be ashamed,” [Psalm 33:5, LXX] being signed with the true Light.
“This is a season of new birth, let us be born again. It is a time of reformation, let us receive again the first Adam. Let us not remain what we are, but let us become what we once were. “The Light shined in darkness,” [John 1:5] in this life and in the flesh, and is chased by the darkness, but is not overtaken by it:—I mean the adverse power leaping up in its shamelessness against the visible Adam, but encountering God and being defeated;—in order that we, putting away the darkness, may draw near to the Light, and may then become perfect Light, the children of perfect Light.”

Christ is said to enlighten mankind by what He has revealed to us. First of all, He has shown us God in His own person (“Then Jesus cried out and said, ‘He who believes in Me, believes not in Me but in Him who sent Me. And he who sees Me sees Him who sent Me. I have come as a light into the world, that whoever believes in Me should not abide in darkness” – John 12:44-46).In Christ we see God as compassionate, long-suffering of our weaknesses and willing to take on our sufferings Himself to restore our likeness to Him.

Christ also enlightens us by showing us – again in His own person – what a human being is. What He taught in words, He also taught by His way of life: “Love one another as I have loved you… the Son of Man did not come to be served, but to serve, and to give His life a ransom for many… I am the light of the world. He who follows Me shall not walk in darkness, but have the light of life… If I then, your Lord and Teacher, have washed your feet, you also ought to wash one another’s feet. For I have given you an example, that you should do as I have done to you.” He shows us that the way to glory is to empty oneself and take up the cross of the sufferings of others just as He did.

THEOPHANY
The event commemorated on this day, Christ’s baptism in the Jordan, is considered a theophany or manifestation of God for two reasons. First of all, it marked the beginning of the Lord’s public life. He would go from the Jordan to the wilderness and be tempted, then return to begin His public ministry.

Hardly noticed by those present, Christ’s baptism has been the occasion for reflection by Christians throughout the ages. Thus St Hippolytus’ Discourse on the Holy Theophany (third century) exults: “Oh things strange beyond compare! How should the boundless River that makes glad the city of God have been dipped in a little water! The illimitable Spring that bears life to all, and has no end, was covered by poor and temporary waters! He who is present everywhere, and absent nowhere— who is incomprehensible to angels and invisible to men— comes to baptism according to His own good pleasure.”

In the thought of the Greek Fathers this event was the occasion of an even more momentous theophany: the New Testament’s first revelation of the Holy Trinity. All three Persons were made manifest together: the Father testified from on high to the divine Sonship of Jesus; the Son received His Father’s testimony; and the Spirit was seen in the form of a dove, descending from the Father and resting upon the Son. This is the theophany recalled in the troparion of the feast: “At Your baptism in the Jordan, O Lord, the worship of the Trinity was revealed; …”

BAPTISM
In the earliest days of the Church baptism was offered to anyone anytime, once they believed. With the development of the Church year by the third century, it became customary to connect baptism with the feast of the resurrection (which baptism reenacts) and, later, with Pentecost, the “outpouring of the Spirit upon all flesh.” When the feast of the Theophany was definitively connected with the remembrance of Christ’s baptism it too became a baptismal feast.

Stichera at Vespers:
When the Forerunner saw Him who is our Enlightenment, who enlightens every man, coming to be baptized, his heart rejoiced and his hand trembled. He pointed Him out to the people and said: “This is the Savior of Israel, who delivered us from corruption!” O Christ God, O sinless One, glory to You!

When You bowed Your head to the Forerunner, You crushed the heads of the dragons; and when You stood in the midst of the stream, You let Your light shine upon all creatures, that they might glorify You, our Savior, who enlighten our souls!