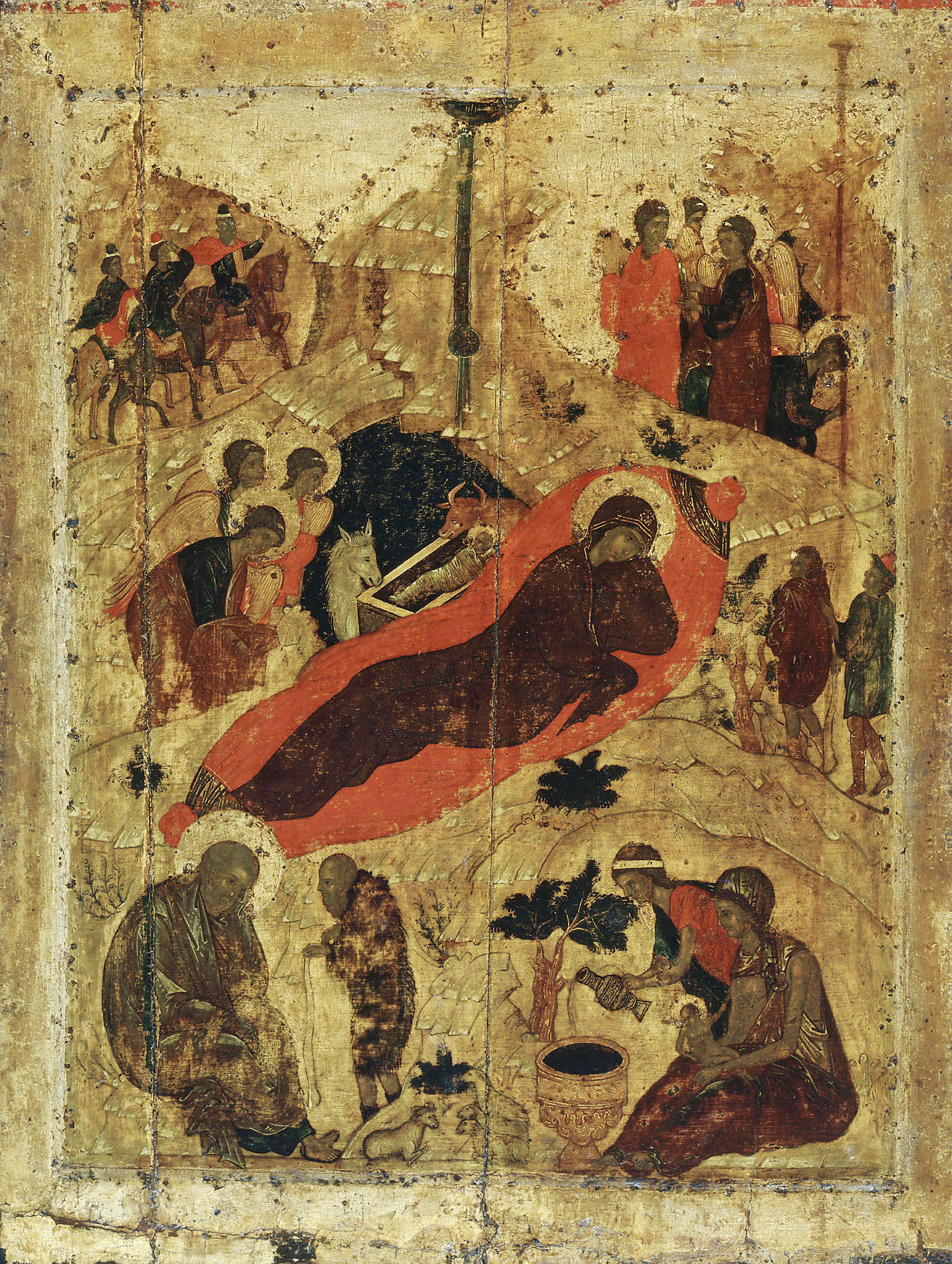 St Gregory of Nazlanzus sums up the Eastern Christian view of Christmas in his famous statement that the Nativity of Christ “is not a festival of creation but a festival of recreation.” The birth of Christ, although a historical event, is not an end but a means to the renewal, sanctification, and recreation of the whole universe. Actually we commemorate, not so much the birth of a child, but the ultimate rebirth and transfiguration of all mankind and with it the whole world of creation. The world, held in bondage by reason of man’s perversion, this is the world Christ redeemed. Christ redeemed humanity and by taking humanity to Himself He redeemed the world.

THE UNIVERSE TRANSFORMED BY CHRIST
When the word of God became flesh He not only became the head of a new race; He became the Lord of a new creation. Christ in His flesh took the whole of creation to Himself that it might share anew in divinity. In Christ Jesus the universe was radically transformed; in His person the world was consecrated and sacramentalized – clay and stone, plant and animal, word and dance – our earth was redeemed, re-created.

By the power of His Holy Spirit working in Christians the world can rise anew. By reason of the love of God made known to it in Christ Jesus our world is alive now, vibrant in our day with life and light. Creation fell by human failure; now it summons us with urgent summons to redeem it. The whole world is one great yearning cry: creation’s unceasing call for redemption.

THE NATIVITY ICON AND THE THEOLOGY OF CHRISTMAS

Perhaps the best expression of this basic appraoch of the Eastern Christian to Christmas is the traditional icon of the birth of Christ. The icon of the nativity contains two main lessons. First it teaches the reality of the event: the indisputable reality of the birth of God into human affairs, the incarnation of Christ, underlining by its details both the divinity and the humanity of the word made flesh. Secondly, the image indicates the effect of this wondrous event on the world and its ultimate recreation in the reconciliation of all things on earth and in heaven (cf. Colossians 1:20).

The sacred icon brings together all creation to join in the “happening” of Christmas, to render service and thanks, each in its own way:

What shall we bring You, O Christ, for being born on earth for our sake? For each of the creatures who have their being from You brings thanks to You: angels their songs, the heavens a star, the
wise men gifts, the shepherds wonder, the earth a cave, the wilderness a manger, but we – the Virgin Mother (Vespers Sticheron)

As we examine the icon more carefully we notice that central to it is a swirling darkness, the mouth of the great abyss, the cave of Bethlehem, symbolic of the soul, the body, the world, in awful and inexorable continuity struck by sin and hungering for the light of redemption to pierce the darkness. And light points out the light which shatters the darkness! The star of Bethlehem casts its long rays
illuminating the One who broke the bonds of hell, darkness, and death forever and by His self-emptying was born for our sake: the Child wrapped in swaddling clothes and lying in a manger, prefiguring the very cave-sepulchre and shrouds of His death and burial.

THE MOTHER OF GOD (THEOTOKOS)
Attending the newborn One is the Mother of God, the holy and evervirgin Mary, who occupies a central role in the drama of redemption and is larger in scale than the other figures. She is the “renewal of all born on earth”, the new Eve, mother of all recreated mankind. She is mankind’s great gift to the Incarnation and through her all mankind gives its assent to the wonder of the mystery. She sits, the
living throne of the King of all, and by the absence of the usual signs of the suffering of childbearing proclaims the wonder of the virgin birth and the divine nature of the One she bears.

Dumb nature is also given a central position by the presence of the ox and the ass, ever deemed important by the Church despite the fact that the Scriptures do not mention their presence. Yet they always appear in the center, representatives of the whole world of nature recreated by the coming of the Savior.

JOSEPH’S DOUBT: THAT OF ALL MANKIND
Joseph is seen strangely dejected outside the central grouping. He is not the father, and this point is emphatically made by separating him from the group. He sits troubled, doubting, and worried
against the blackness of the cave which reaches around him in his unbelief. He is struggling to accept the miracle that takes place before him and in that struggle represents not only himself but all mankind who with similar turmoil wrestles with the fact of the Incarnation which seems beyond words or reason. Wistfully he looks back over his shoulder to consider the holy scene. In many icons
Satan, disguised as a shepherd, stands before Joseph and tempts him – as he has done to many since – to disbelieve the virgin birth.

The temptation of Joseph is balanced by the faith and belief of the Magi who approach on horseback following the star and in another scene arrive at the foot of the manger to present their gifts and themselves, “the beginning of the nations”, to the Lord.

Angels representing the celestial world carry out their two-fold function of adoring and glorifying the Savior as well as announcing to the unseen shepherds the good tidings of glad joy. The icon is usually completed by a most tender scene transmitted by the apocryphal gospels stressing the humanity of the Christ in His submission to the requirements of nature as He is carefully bathed by two midwives.

The icon of the nativity of Christ is the visual rendition of the song of the Church at this feast:

Today the Virgin gives birth to the One transcendent in essence; and the earth offers a cave to the Uncontainable One. Angels with the shepherds give glory and wise men journey onward following the star; for to us is born a newborn Child who is God from all eternity. (Kontakion of the Feast)

The Eastern Christian who venerates this icon proclaims the wondrous event of the birth “of the One transcendent in essence” and the attending recreation of the whole universe which has now been set In motion by the birth of this little Child “who is God from all eternity”.

Christ is born: glorify Him!

Beholding him who was in God’s image and likeness fallen through transgression, Jesus bowed the heavens and came down. Without changing, He took up His dwelling in a virgin womb so that He might recreate fallen Adam, who cried to Him: “Glory to Your manifestation, O my Deliverer and my God!” (Sticheron at the Liti)

Man fell from the divine and better life. Though made in the image of God, he became through transgression wholly subject to corruption and decay. But now the wise Creator fashions him anew: for He has been glorified. (First Ode of the Canon at Orthros)