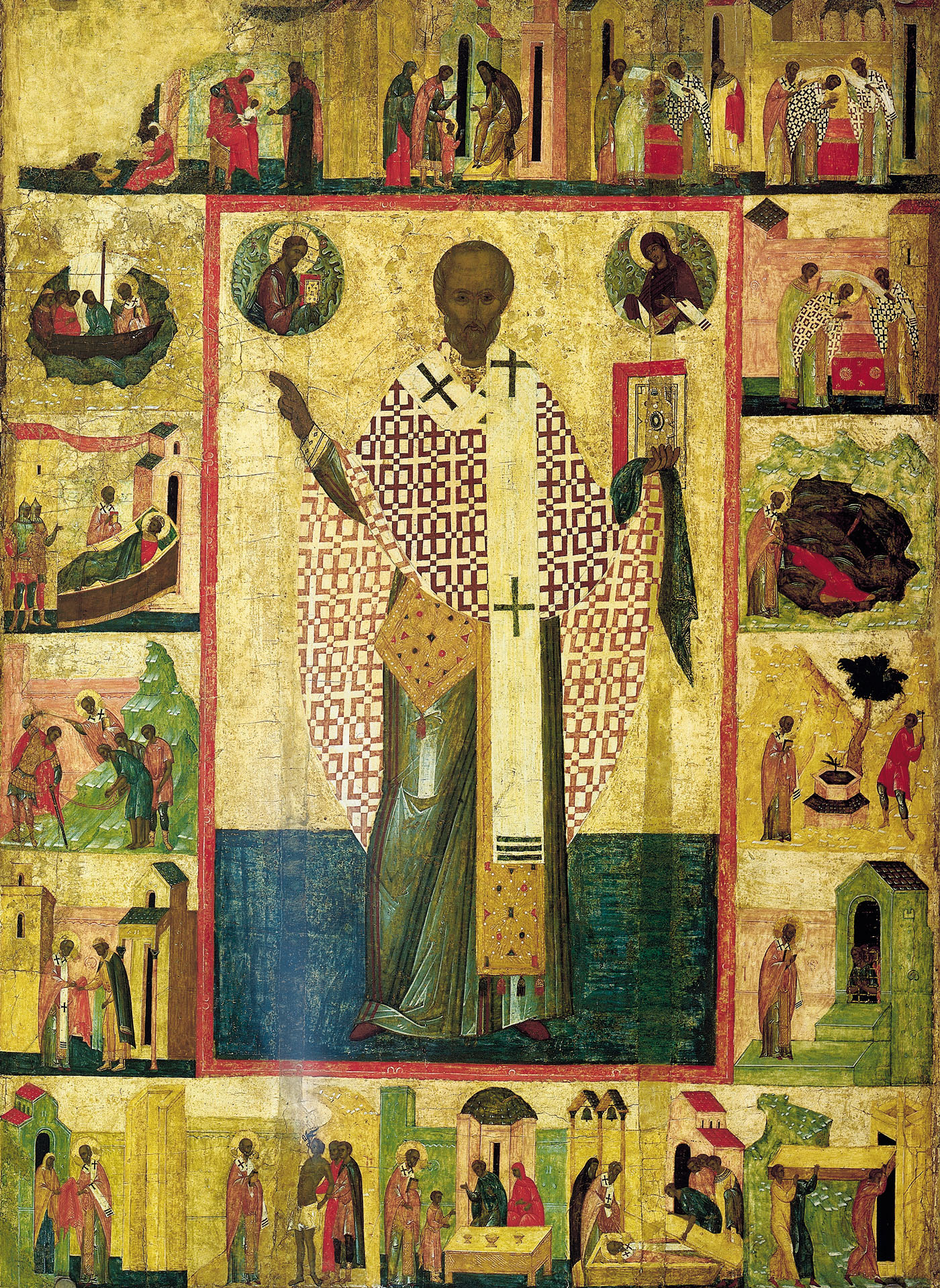 Here is a look at how Eastern Christians celebrate St. Nicholas Day:

In Greece, the Greeks will display the Icon of St. Nicholas Prominently in their home the Nativity Lent as a reminder to give alms in emulation of this great Saint, The mother of the home after reciting St.Nicholas’ troparia with the children will sprinkle salt water on the icon and the children for the safety of the house, the children and those who sail the sea (remember that St Nicholas is both the patron saint of children and sailors). Greek tradition notes that when St. Nicholas intervenes with a miracle for his people, that his clothes are soaked with brine, his beard always dripping with seawater, and his face covered with perspiration because he has been fighting storms to reach sinking ships and save men from drowning. Greek ships carry an icon of St. Nicholas, as he is regarded as master of wind and tempest.

In the Ukraine, St. Nicholas, Sviatyij Mykolai, comes on December 6th (or the 19th in the Orthodox Julian calendar). It is a happy day with visiting and sleigh rides. Schools have plays telling Nicholas stories and the saint visits local churches. Dressed as a Byzantine Bishop, the good Saint is often accompanied by angels. He quizzes children on their catechism before giving gifts. Traditionally this is the main day for gift-giving. Today many Ukrainian churches have St. Nicholas celebrations to help children understand that the holy man Nicholas came long before Santa Claus.

In Bulgaria, Nikulden——December 6th, is a great winter festival. Bulgarians celebrate St. Nicholas as the protector of sailors and fishermen. Stories are told of St. Nikolay, the commander of the sea, calming wind and storms and saving ships in danger. Like Greek and Russian sailors, Bulgarians keep icons of St. Nicholas on shipboard seeking protection from storms. Sailors’ wives put icons of Nicholas into the sea, praying to St. Nikolay to bring their husbands safely back to shore. A special fish dish, ribnik, carp wrapped in dough or baked with rice, is served as carp is regarded as Nicholas’ servant. Ribnik is baked in the oven along with two special loaves of bread. The food is blessed at church or at home before being served. After wafting incense over the food, the host raises the bread high, and breaks it in half. One half he keeps, the other is left on the table. The food is kept out on the table all day to be shared with neighbors and other guests. It is a great festival day which ends with songs and fun.

In Romania, on the night of December 5th, boots are carefully polished to be put by the door or on the windowsill to wait for St. Nicholas’ (Sfantul Nicolae) visit. He is generous to adults as well as children, putting a little present in each boot. If a rod is found in a shoe, it is a warning that behavior needs to improve. On the sixth of December, gifts are given to friends, children, and those in need.

The Article from The Voice In The Wilderness: Newsletter, Dec 2006