Who is Patriarch Sviatoslav? 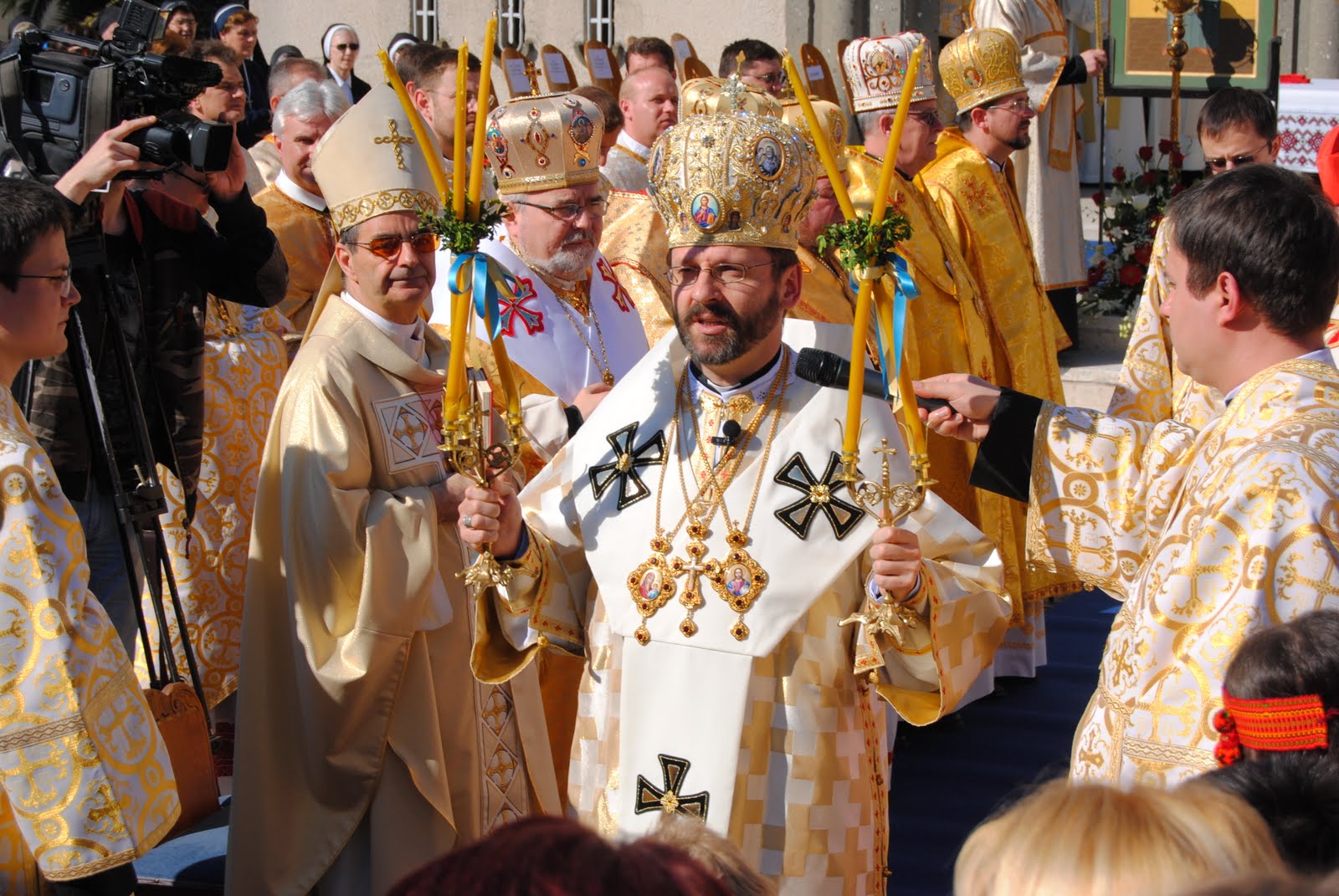 His Beatitude Sviatoslav (Shevchuk), Head of the UGCC:
Bio taken from www.ugcc.org.ua

Born May 5, 1970 in Striy, Lviv region, he began his religious education in 1991-1992 at the Don Bosco theological seminary in Buenos Aires.
He continued his education from 1992 to 1994 in the Lviv Theological Seminary.
Ordained a deacon on May 21, 1994 (by Bishop Fylymon Kurchaba), he was ordained a priest on June 26, 1994 (by His Beatitude Myroslav Cardinal Liubachivsky).
From 1994 to 1999 he studied at the papal university of St. Thomas Aquinas in Rome, where he received his doctoral degree summa cum laude in theological anthropology and the moral roots of theology in the Byzantine theological tradition.
From 1999 to 2000 he served as prefect of the Lviv Holy Spirit Theological Seminary.  From 2000 to 2007 he was vice rector of the seminary.  In 2001 he became vice-dean of the theology department at the Lviv Theological Academy (now the Ukrainian Catholic University).
In 2002 he was named head of the secretariat and personal secretary to His Beatitude Liubomyr Cardinal Husar, head of the Patriarchal Curia in Lviv.
In 2007 he was named rector of the Holy Spirit Seminary.
On January 14, 2007, His Holiness Pope Benedict XVI blessed the decision of the Synod of Bishops of the Ukrainian Greek Catholic Church to name Father Sviatoslav Shevchuk as auxiliary bishop of the Protection of the Blessed Mother eparchy in Buenos Aires, Argentina.  On April 10, 2010 he was named Apostolic Administrator Eparchy of Argentina.
On March 23, 2011 at an election held by the Synod of bishops of the Ukrainian Greek Catholic Church he was named Major Archbishop of the church.  On March 24, the election was blessed by Pope Benedict XVI, He was enthroned on March 27, 2011 in Kyiv in the Patriarchal Cathedral of The Resurrection.

Since March 2010, Bishop Sviatoslav, 40 years old, has been the Apostolic Administrator of the Ukrainian Catholic Eparchy (Diocese) of the Protection of the Mother of God in Argentina.

His Beatitude Sviatoslav, the newly elected Head of the UGCC made his profession of faith and promise to carry out faithfully his office in the presence of the bishops of the Electoral Synod.

The ceremonies of the enthronement of His Beatitude Sviatoslav as Major Archbishop (Patriarch) of Kyiv-Halych will take place in Kyiv (Ukraine), on Sunday, 27 March, during the Hierarchical Divine Liturgy at the patriarchal Sobor of the Holy Resurrection of Christ.  This Divine Liturgy beginning at 10:00 AM will bring to completion the Electoral Synod.

The Electoral Synod followed a day of prayer and reflection by the membership of the Synod.  Sunday, 20 March, Archbishop Ihor along with the bishops celebrated a Divine Liturgy at the Cathedral Sobor of St. George, in Lviv.  After the Divine Liturgy the bishops visited the crypt at St. George’s Cathedral and prayed at the tombs of the Servant of God Metropolitan Andriy Sheptytsky, Patriarch Josyf Slipij, Major Archbishop Myroslav Ivan Cardinal Lubabivsky as well as other church leaders of the UGCC.   Very Rev. Doctor Borys Gudziak, rector of the Ukrainian Catholic University in Lviv led the bishops in their day of spiritual reflection.

The Ukrainian Greek Catholic Church is the largest Eastern Church in full union with the Holy See.  On 30 March 1991, Major Archbishop Myroslav Ivan Cardinal Lubachivsky ended his exile in Rome and returned to Lviv.  The Ukrainian Greek Catholic Church ended its forced clandestine existence in 1989 after a period of more than 40 years of persecution by the Soviet Authorities.

His Beatitude Sviatoslav was born in Striy, Ukraine on 5 May 1970. Between 1991-1992 he studied at the Don Bosko Centre for Philosophy and Theology in Buenos Aires, Argentina and then later at Holy Spirit Seminary in Lviv 1992-1994.  He was ordained a deacon for the Archeparchy (Archdiocese) of Lviv on 21 May 1994 by the late Bishop Phileomon Kurchaba C.Ss.R. and a priest of the Archeparchy of Lviv  by Major Archbishop Myroslav Ivan Cardinal Lubachivsky on 26 June 1994. He completed his doctoral studies in Theological Anthropology based on the Byzantine moral and theological tradition at the Pontifical University of St. Thomas Aquinas in Rome in 1999 receiving Summa cum laude.

Between the years of 1999 and 2009 he served as prefect, vice rector and rector of Holy Spirit Seminary in Lviv.  In 2001 he was appointed vice-dean of the theological faculty of the Lviv Theological Academy (later the Ukrainian Catholic University).  From 2002 to 2005 he was the chief of staff and personal secretary of His Beatitude Lubomyr Husar and the director of the Patriarchal Curia in Lviv.

On 14 January 2009, His Holiness Benedict XVI, confirmed the decision of the Synod of Ukrainian Greek Catholic Bishops to nominate him auxiliary bishop of the Protection of Mother of God Ukrainian Catholic Eparchy in Buenos Aires, Argentina, titular bishop of Castra di Galba. His Episcopal ordination took place on 7 April 2009 at St. George’s Cathedral Sobor in Lviv.  The main consecrator was Archbishop Ihor Vozniak along with co-consecrating Bishops Mykhajlo Mykycej (Buenos Aires) and Julian Gbur, (Striyj).  On 10 March 2010, Bishop Sviatoslav was appointed Apostolic Administrator of the Eparchy of the Protection of the Mother of God in Buenos Aries.  He is currently the head of the Synodal Committee for Clergy.

His Beatitude Sviatoslav’s native language is Ukrainian. He is fluent in English, Italian, Polish, Russian and Spanish.