The Colors of Easter 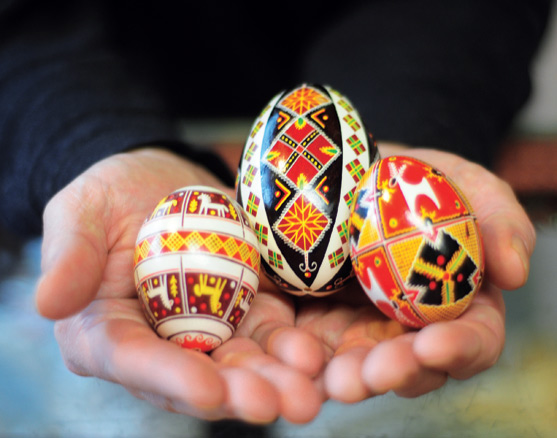 The Colors of Easter: Ukrainian faithful carry on an ancient art

Article by Marvin Anderson, from ONE Magazine (www.cnewa.ca)
Photos by: Erin Edwards

“Things have certainly changed, but this store remains the same,” says Markian Surmach, the owner of Surma — a family-run shop in the heart of New York City’s historic Ukrainian neighborhood on the Lower East Side. “Just look at it,” he says, pointing to Taras Schevchenko Place across the street, where the Cooper Union for the Advancement of Science and Art recently built a state-of-the-art facility. The steel-and-glass building occupies the full length of the city block, casting a long shadow over Surma’s modest storefront in a prewar walk-up building.

For nearly a century, Surma has served the city’s Ukrainian community, selling products from the homeland, such as traditional embroidered clothes and accessories, artwork, antiques and Ukrainian-language book and newspapers.

“They find their culture, and they find themselves here,” says Mr. Surmach. “People come to the store in search of a simpler and less complicated way of life.”

Before getting lost in Surma’s labyrinth of authentic Ukrainian treasures, patrons pass by a small glass showcase near the entrance. Inside, dozens of pysanky, or traditionally decorated chicken and goose eggs, shimmer on display. Radiant red, yellow and orange eggs intersperse with others dyed cooler hues of blue, green and violet. Intricate Christian and ancient pagan symbols adorn the surfaces.

As with most Slavs of Eastern Europe — Croats, Czechs, Poles, Rusyns and Slovaks — Ukrainians have cultivated the art of egg decoration to commemorate Christ’s passion, death and resurrection.

However, pysanky are also an intricate string in the collective fabric of Ukrainians and people of Ukrainian descent around the world. The designs serve as a living record and reminder of a shared, idyllic agrarian past.

“They’re not just eggs,” explains Mr. Surmach. “They have meaning. They represent a culture that respected the world around them.”

In the Soviet era, authorities suppressed pysanky (from the Ukrainian verb pysaty, “to write”) along with other religious practices and most national cultural expressions. Nevertheless, Ukrainians continued making pysanky in secret, and they quickly emerged as emblems of national resistance.

Mr. Surmach himself readily shares the memory of the first time he decorated an egg. “I would have rather been out with my friends and not painting eggs,” he says with a laugh. Mr. Surmach still occasionally makes pysanky with family and friends. However, he imports from Ukraine those he sells in his shop.

“I have respect for it now,” he says, as he carefully removes a small blue-and-white one from the showcase and holds it up to the light to reveal the design’s delicate detail.

Artists and historians debate precisely when Slavs first began creating pysanky. Most, though, agree that the art form appeared in the region at least 2,000 years ago.

“This is the history of a civilization,” says Sofika Zielyk, a renowned New York-area pysanky artist and friend of Mr. Surmach. She learned the basics of the craft from her mother, making her first psysanky at the age of 6. Now in her late 40’s, she has spent the last 20 years perfecting the art form. She has exhibited her work in galleries around the country, most notably at the Metropolitan Museum of Art and the American Craft Museum in New York City.

According to Ms. Zielyk, the region’s early inhabitants worshiped the sun god, Dazhbog, who warmed the earth and was the source of all life. As agrarian people, they depended on the sun’s rays to help cultivate the crops they needed to survive.

The pagan cosmology reserved a sacred place for birds, as they alone could fly close to the sun god. The early Slavs, however, did have access to birds’ eggs, whose yolk resembled the sun. They believed eggs possessed magical powers and cherished them as talismans.

They painted depictions of flora and fauna found in the natural world around them on the eggs’ surfaces with colors derived from organic materials. From berries, they extracted the color red; from leaves, green; and from tree bark, brown and orange.

The early Slavic peoples eventually started drawing geometric designs, symbolizing elements of their cosmology. Many of the shapes have endured through the millennia and remain staples of pysanky’s vocabulary.

After Slavs embraced Christianity from Byzantium in 988, they adapted many of their customs to Christianity. The egg itself, once the symbol of spring and nature’s “rebirth,” became that of Christ’s resurrection and man’s rebirth.

Traditional pysanky designs, too, changed meanings. The most common and iconic of them, the eight-pointed star, today represents Jesus Christ. In pagan times, however, it was the sign of Dazhbog.

Experts do not agree on when and where Christians began using decorated eggs to celebrate Easter. The oldest existing historical record of Christian-era pysanky in Ukraine dates back to only 1650, when French cartographer Guillaume Le Vasseur de Beauplan described them in his travel log from a visit to the country.

Tanya Osadca, a celebrated psyanky artist and esteemed authority on Ukrainian folk art, concedes that other Slavic peoples and Greeks also have long traditions of decorating eggs in a similar fashion to commemorate the Christian holiday. The custom, she says, may even have developed in the West as early as the 13th century, after King Edward I of England gave members of his court colored eggs as gifts.

“But,” says Ms. Osadca about Ukrainian pysanky, “I don’t think anyone else has such intricate designs.”

Pysanky artist Sofika Zielyk sits in a chair next to a small coffee table in the living room of her apartment on New York City’s Lower East Side. As she discusses her craft and its symbolism, she pulls out two baskets filled with pysanka eggs from beneath the table.

“No two eggs are the same,” she says. “No matter what you do, the eggs will always look different.”

The apartment feels more like a Ukrainian art museum than a home. Bookshelves filled with countless pysanky line the walls. Large plates hold bunches of the delicately painted eggs. Some are made of ceramic. Most, though, are ordinary chicken and goose eggs. A few large ones are ostrich eggs.

Next to the bookshelves hang two paintings by the Ukrainian artist Opanas Zalyvakha. A Soviet dissident in the 1960’s and 1970’s, he was arrested, imprisoned, persecuted and finally exiled by Ukraine’s Communist authorities. The painter offered Ms. Zielyk the paintings — entitled “The Rising” and “Moscow’s Huge Embrace” — in return for one of her decorated goose eggs. Though his health was failing at the time, Ms. Zielyk says her egg struck a chord with the master.

“I told him it would keep evil spirits away,” she says. In response, he smiled, gallantly took her hand in his and kissed it.

She selects an egg from her collection and holds it out. On it, she has painted a sequence of white circles around its circumference. She says wives usually offer pysanky with this pattern to husbands whom they suspect of infidelity.

“The hoops come off at night to bind the man,” she says with a coy smile. “I sell a lot of these.”

The materials required to make traditional pysanky include virgin white eggs, candlewax, dye and a kistka, or a pencil- size stick with a tiny funnel attached at the end.

With the large end of the kistka’s funnel, the artist collects melted wax from a lit candle. The artist then draws the pattern or symbol onto the shell with the thin stream of liquefied wax as it exits the fine end of the funnel.

“I enjoy lighting that match,” says Ms. Zielyk. “It’s the beginning of the process, and it relaxes me. It’s a connection I have to something someone did 2,000 years ago, and I’m doing it in modern-day Manhattan.”

The artist then submerges the entire egg into a bowl of colored dye. The hardened wax protects the portion of egg it covers from the dye. The artist removes the egg, dries it and, depending on the design, adds patterns or symbols with the kistka. The process is repeated.

As a final step, the artist carefully removes the wax. Only then do psyanky reveal their true colors.

“You can’t move forward without looking back,” says Ms. Zielyk, as she slowly rotates one of her pysanky in her hand as if discovering it for the first time.

A myriad of factors affect the outcome, says Ms. Zielyk. A shaky hand, a change in mood or an egg’s individual shape and texture can make or break a successful design.

“It’s not a project for the impatient,” says Ms. Zielyk, adding that she has had students quit after realizing how difficult it is to create symmetrical motifs on an egg’s surface.

Depending on the intricacy of the design, the process may take a few hours to a few days.

“You have to have good eyes and steady hands,” she says, “and eventually a sore back.” Some people prefer to make pysanky using a much simpler method. A new product helps create colorful and intricate pysanky in just minutes. It consists of plastic decals saturated with reproductions of traditional pysansky. Tailored to fit standard eggs, the decal transfers its design onto an egg’s shell when submerged in water.

The center, nonetheless, sells the increasingly popular decals in its gift shop along with plastic eggs and other novelties. Serious aficionados may also purchase kistky, old-fashioned beeswax and step-by-step guidebooks and videos.

The center — run by the Ukrainian Orthodox Church of America — plans to complete a 30,000 square-foot Ukrainian museum, which will house a permanent pysanky exhibit. In the meantime, it stores its collection of priceless works of art and artifacts, including paintings, portraits, sculptures and books — some of which are more than 300 years old — in the adjacent cultural center.

“This is one of our best in the collection,” says Ms. Honcharenko, as she carefully opens a green box filled with cards. On each of the cards is a hand-drawn image of a pysanka.

In the 19th century, the Duchess Katerina Skarzy dispatched artists across Ukraine to draw pysanky and itemize the symbols in their designs and their meanings. The museum has more than 4,000 of the cards and an original copy of the catalog of the symbols.

During World War II, many believed the set to have been destroyed and lost forever. Miraculously, though, Konstantyn and Olena Moschenko, natives of Poltava, Ukraine, managed to assemble and preserve it through the tumultuous period.

In 1961, Mr. and Mrs. Moschenko donated the collection to the church, which served as the foundation for the present archive and soon-to-open museum. Today, experts from around the world visit the center to study the cards.

“It’s important to know your past to know who you are,” she says. “It helps shape you. This is what we will teach the next generation.”