A HOUSE OF PRAYER 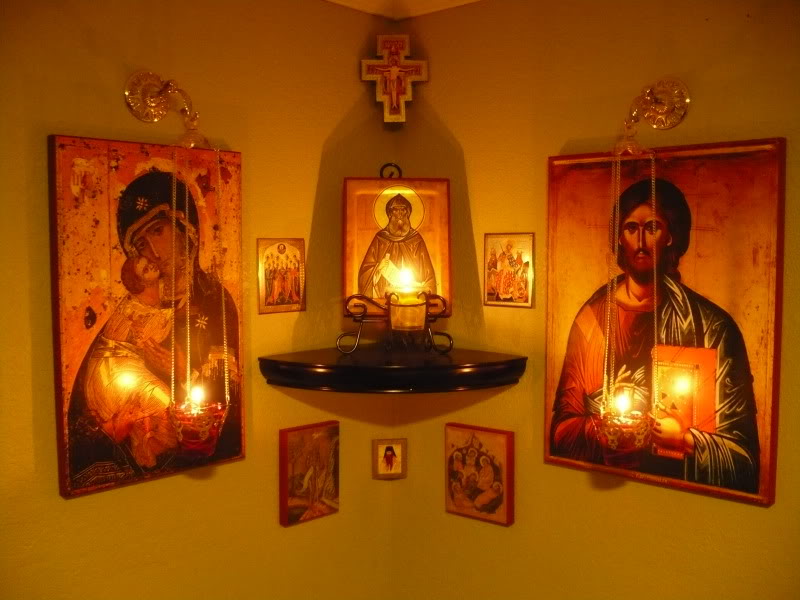 According to the age-old tradition of the Byzantine Churches, both Catholic and Orthodox, the home is a kind of church, because it houses an assembly of believers. When people occupy a new house, the priest performs a consecration, anointing the four walls with holy oil and sanctifying the house with holy water and incense. Psalms are chanted and the Gospel story of Jesus’ visit to the house of Zacchaeus (cf. Luke 19:1-1O) is proclaimed. At the conclusion the traditional prayer for “Many Years” is sung by the priest for the family members.

When the family moves into a new dwelling, they choose an eastern wall, preferable in the living room, for the icon corner. This corner is furnished with icons of Christ, the Theotokos, the holy cross and the patron saints of the family members. Some families preserve heirloom icons, handed down for generations, or icons of special clan or family patrons. The icon corner usually includes a
lectern or small table upon which are placed a cross, a small incense burner, the Holy Scriptures and prayer books.

Since icons are considered to be sacraments of the special presence of the holy ones depicted in them, oil lamps are burned before them. At the door of the house one often finds a special icon of the Theotokos, known as the Doorkeeper, guarding the dwelling from all harm.

People entering a Byzantine home may often go directly to the icon corner and greet the holy icons with a bow or a kiss, sometimes before greeting the people, just as one does when entering church.

PRAYER TO THE EAST
In Eastern Christian tradition, all prayers, both public and private are said facing the East, “for as lightning that comes from the east and shines as far as the west, so will be the coming of the Son of Man” (Matthew 24:27). Thus churches are always built with the apse pointing East, towards the rising sun, symbolic of Jesus Christ, the Sun of Justice. In church the priest, deacon, and people worship standing upright, facing this direction, awaiting the One who will lead them to the heavenly promised land, the New Jerusalem. In their homes, therefore, Eastern Christians unite themselves with their
brothers and sisters throughout the world and pray standing up, facing the East.

The custom of standing at prayer can be traced both to the Old Testament and to pagan antiquity. God commanded His people to eat the Passover meal “standing, with loins girt and staves in their hands” (Exodus 12:11). The pagan Greeks always stood while praying before their idols.

Early Christians imitated the Greeks, reasoning that man, the only animal that walks erect and is created in the image and likeness of God, should pray standing to exemplify his dignity as a child of God.

Kneeling was done only as a sign of repentance for sin. In addition, early Church councils forbade kneeling on Sunday, commanding the faithful to stand as a testimony to their belief in Christ’s resurrection. Consequently Eastern Christians do not regularly kneel at prayer in their homes as Western Christians often do.

DAILY PRAYER IN THE HOME

With icons, crosses, incense and other sacred objects, all imbued with the sense of God’s presence, Byzantine Christian homes can truly be called miniature churches. Those who dwell within are reminded that God lives with and in them, and they recall the words of St. Gregory the Theologian, “It is better to remember God than even to breathe.” On rising in the morning, before and after every meal, in the evening and before going to bed the icon corner stands as an invitation for the family to pray.

The Byzantine liturgical tradition offers a limitless treasury of prayers for every day, every feast, and every season of the year. In addition to the hours of the daily offices, there are numerous akathists and canons which may be recited, as for example, when someone is preparing to receive Holy Communion.

Before Christ left His disciples, He promised that they would one day dwell with Him: “And when I go and prepare a place for you, I will come again and take you to myself, that where I am you may be also” (John 14:3).

The Eastern Christian home reminds all who enter it of Christ’s promise and the heavenly home which awaits them.

FASTING, ALMSGIVING AND ASCETIISM
In prayer we rise to the throne of God who has given us access to Himself. We also attempt to take the lifestyle of heaven and bring it ‘down’ to reorient our daily activities. Fasting is one such practice. It stands out in contrast to the ways of the world around us, especially in a culture such as ours that endorses continual consumption. When we put aside food, entertainment, pleasure in the spirit of fasting we are saying to the world, “We are not from here.” When we fast we recognize that life is not simply to be found in the enjoyment of material creation, but in the relationship we have with its Creator.

Closely linked to fasting is almsgiving, another denial of the way of this world. Our society promotes consumerism. It says, “Build up for yourselves treasures on earth.” We say, with St. Paul, that material goods are given us not only to satisfy our own needs, but for the doing of good. We say, as Christ did, that our kingdom is not ultimately of this world and imitate His love for mankind by the way we use the resources He has given us.

Finally, while our place is in the heavenly realm, we do not have full possession of it yet. And, so we find ourselves each day engaged in an unseen warfare, “not against human forces but against the principalities and powers, the rulers of this world of darkness” (Ephesians 6:12). Many of our Church’s daily prayers are invocations asking for help and protection against the powers of evil. We recognize that there is more to the world in which we live than what is visible on the physical level.

Living, then, as citizens of the heavenly realm, we surround ourselves at all times with means of access to that kingdom. Icons are found in our homes, like churches, and we gather there for prayer. We bring the values of that realm to bear in our domestic affairs as well. There we fast and we extend hospitality in Christ’s name, deepening our experience of our true homeland. We try to live every day in an atmosphere of the kingdom, to continually remind ourselves that our baptism has made us actual coheirs with Christ of all that the Father has promised.

HYMNS FROM THE BLESSING OF A NEW HOME
TROPARION (TONE 8): As salvation came to the house of Zacchaeus by Your entrance, O Christ, now by the entrance of Your sacred ministers and with them Your holy angels, grant Your peace to this house and mercifully bless it, saving and illumining all who desire to live in it.

STICHERON (TONE 5): Bless this house, O Lord, and fill it with the good things of Your earth, preserving unharmed from every evil circumstance those desiring to live in it with piety. Grant to them all heavenly abundance and Your earthly blessings, and, as You are compassionate, be merciful according to Your great mercy.