Putinism and the Ukrainian Catholic Church 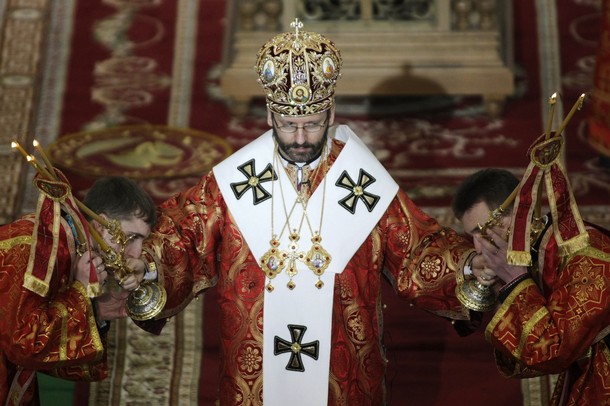 On March 25th of this year, Sviatoslav Shevchuk was elected head of the Ukrainian Greek Catholic Church (UGCC).

Are those crickets I hear? The sound of one hand clapping, perhaps? Put another way: Why does this matter?

To begin, the election entrusts to his care the souls of some four and a quarter million Christians, all heirs to a lineage of tragedy that spans centuries and includes the Soviet-perpetrated monstrosity of the Holodomor, in which an estimated three to ten million people were programmatically starved to death in the single year, 1932-1933. Throughout this and other episodes of national suffering, the UGCC acted largely to protect the people and lead in the resistance to both Nazi and Soviet tyranny.

During the turbulence of the twentieth century, Shevchuk’s predecessors distinguished themselves as heroic, sometimes pugnacious leaders—more prophets than princes of the Church—who regularly placed themselves at personal risk. The names Sheptytsky, Slipyj, and Husar come quickly to mind.

It is in the stead of such giants that Shevchuk now stands—at the remarkable age of forty. Such youth comes with its share of advantages and liabilities. Among the former, one may assume there is energy. He’ll need it.

Shevchuk assumes his role in a world experiencing the Chinese curse of interesting times, with paradigms shifting faster than a gear-stick in Mario Andretti’s palm.

Russia is host to a still-shifting paradigm, and from his office in Kiev, Sviatoslav Shevchuk need only look out the window to see it.

The history of the Orthodox Church in the land of Kievan-Rus is so complex that to call it Byzantine is both pun and fact. And, to be clear, the UGCC is an Orthodox Church. That it identifies as such while living in communion with the bishop of Rome is an important aspect of that complexity.

In addition to the UGCC, three distinct Orthodox Churches exist in Ukraine, each with claims that challenge the legitimacy of the others. This multiplicity is rooted in the trauma of the Soviet era when the world’s largest Orthodox Church, the Moscow Patriarchate, was accused of colluding with the Kremlin. This is sensitive, difficult terrain, and beyond the scope of this essay. But recent news that former KGB officer Vladimir Putin will likely return to the Russian presidency in 2012, underscores the importance of ecclesial politics in the future of Ukraine and all of Eastern Europe.

George Weigel has been one of few in the U.S. to call attention to this unfolding story. In Ukraine there are many keen on strengthening ties with Moscow, even unto reunification. And some of Putin’s critics see in his cultivation of relations with the Moscow Patriarchate, an essential element in a re-imagined imperialism, with Orthodoxy replacing Marxism as the source of its inspiration and broker of its divine mandate. If these critics are on to something, and if history offers a clue, such an agenda would require the elimination of the “competition.” Ominous then, is Weigel’s account of old-school intimidation tactics deployed against an especially impressive UGCC initiative, The Ukrainian Catholic University.

At the same time, Benedict XVI has made progress toward communion with the Orthodox a priority of his pontificate. There are profound theological reasons for this. There is also the mutual recognition that the Latin and Orthodox Churches must forge a genuine evangelical partnership on behalf of Europe. One might even suggest that the restoration of that continent’s soul depends upon the restoration of the unity of the apostolic Church, breathing with “both lungs.”

This is a challenge steep enough to be impossible, had it not everything to do with the kingdom of God.

It is my hope that this partnership be engaged, and that it be extended to include the entire West in a coordinated mission to re-present the Gospel to a culture in dire need of it. What then might we expect the UGCC to contribute to this ambitious project?

Since 2001, the bishops of the UGCC have held at least fifteen international synods, at a considerable expense of time and money. From them, one word perennially emerges to express the collective discernment and serve as the clarion call for going forward: Evangelization.

I should admit that mine is a somewhat unusual point of view. I wasn’t born into the UGCC. Neither was I drawn to it by any outreach on its part. In fact, I stumbled into an intimacy with it that, in addition to reception into the Church, has included the privilege of entering one its seminaries.

There are many things to say from this perspective. Preparing to serve a people whose faith I shared but whose story I did not know has been humbling. But as my appreciation for the Church’s gifts has grown, so too has my discouragement when failure to adapt, develop and share them seems willful. In countless conversations, cradle-born members of the UGCC have expressed incredulity at my enthusiasm for the Church, while seeming to view their own participation as a form of ethnic fealty.

In many parishes, a sense of desolation is palpable, with services attended by a startling disproportion of elder faithful. This graying—or ghosting – of the parishes is a crisis to which innovative remedies seem noble exceptions rather than the broad harvest of episcopal action matching synodal rhetoric.

On the same soil, Orthodox Churches, dealing with formidable challenges of their own, are finding ways to grow communities true to their lineage and attractive to those outside it, cooperating in projects designed to engage the wider culture.

To be sure, these impressions are anecdotal. Yet, I can’t think of a single person in formation with me who would fault these observations, except perhaps for being too restrained. Within its walls one often hears the frustration that the UGCC is essentially a Latin Church in Byzantine clothing, burying its distinctive gifts like the talents of the Gospel parable. Indeed, not long ago, Rome itself issued a rather stringent exhortation to the Eastern Churches in communion with it to commit themselves to the realization of the charisms unique to their traditions.

Although I have presented what may seem a gloomy forecast, we know how quickly things can change. And I remain hopeful.

The Eastern Churches bear an aspect of the Christian faith that is profound and astonishingly rich, with the power to amaze a culture that wrongly presumes it has seen it all. I also believe our culture is in urgent need of the vast treasure and deep beauty that have been entrusted to these Churches.

This is but a portion of what awaits the considered response of the young man in Kiev now at the helm of a great Church.

In Ukraine, during the celebration of a special occasion, it is customary to sing, Mnohaya Lita (“God grant you many years”). And so, may Sviatoslav Shevchuk prove to be a true apostle, one who guides his Church with wisdom, courage and love. And may God grant him many joyful years in which to do it.

Tim Kelleher is the new media editor for First Things.