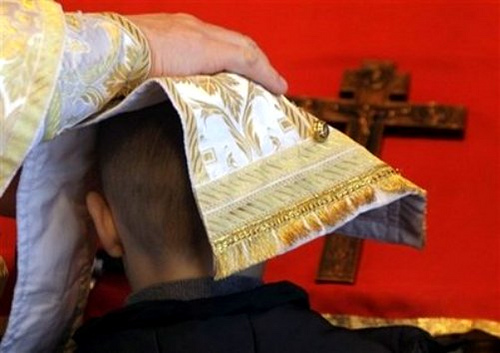 by Bishop Kallistos of Diokleia

In the Epistle (1 John 4:7-11) and the Gospel (Luke 6:31-36) that are read in honor of St. John of Kronstadt, we notice the emphasis upon love. Our Holy Father St. John of Kronstadt, Wonderworker of all Russia, is an example to us of loving compassion, of pastoral love. In the Gospel in particular, the Lord emphasizes that our love should not simply be towards the people that we find congenial, not just towards those who show love towards us. It is to be far wider, we are to love our enemies, we are to love all our fellow humans, our love is to be without limits.

It is very clear that when St. John in his Epistle and our Savior in the Gospel speak about love they do not just mean something sentimental, something emotional, they mean something far more profound. The kind of love that they envisage, a universal all-embracing love, a love without limits, can only be a result of prayer, of ascetic effort. Such love is something for which we must struggle and suffer. Such love cannot be based just upon our emotional feelings, it has got to have a deeper basis.

What is this deeper basis? It is precisely the service that we are celebrating together now, the service of the Holy Eucharist, which is indeed a sacrament of mutual love. Our love has its foundation and inspiration in the Divine Liturgy. If we are to show more vividly the kind of love of which the apostle John and our Lord speak, that can only come first and foremost through a deeper experience of Holy Communion, through frequent Communion received after profound and searching preparation.

St. John of Kronstadt was above all a Eucharistic Priest. He put The Holy Liturgy at the center of his life, and this was the source that enabled him to show such a dynamic and universal love. Our receiving of Holy Communion, while it is with the blessing of our spiritual father to be frequent, should never be mechanical or automatic. We are to prepare. And how should wedo it? We are to prepare above all through the use of the sacrament of Confession.

Here there are as we know different disciplines. Some have been brought up to go to confession before every Communion, others have a blessing from their spiritual father to go more frequently to Communion without confession every time. But undoubtedly in our Eucharistic experience the sacrament of healing which we call Confession or the sacrament of repentance plays a central part.

Why do we need to go to confession? Is it not enough to confess our sins with sincerity in our private prayers each evening, will not God forgive us from the very moment that we confess our sins? Yes, as soon as we turn to God in true repentance He forgives us. God is always more ready to forgive than we to repent. Even the slightest turning of our heart will be blessed by God. Why then are we taught also to go to the sacrament of confession? I can think of three reasons certainly, perhaps you can think of more.

First of all there are no private sins, all sins affect our brothers and sisters in Christ. All of our sins, however secret, have an effect on the community. If I feel in my heart anger towards someone else, even if I do not show it by word or action, that evil disposition in my heart has a destructive effect on others around. Every sin is a sin against the community, every sin however secret is a stumbling block for others and makes it harder for them to serve Christ.

In the early Church confession was public. After the fourth century, with the growth of the Christian community, that gave scandal and so confession assumed its present form, as an opening of the heart before the priest alone, under conditions of secrecy. But let us remember that during confession the priest is there, among other things, as the representative of the community, of the people. The fact that we confess not just to God, but in the presence of a fellow man, shows that we acknowledge the communal social dimension of all our sins. In confessing in his presence we are also asking forgiveness from the community. I heard a story once told about St. John Maximovitch of Shanghai and San Francisco. I have also heard it told of others, but the same thing can happen more than once.

Once before the Divine Liturgy he was hearing the confession of a man, and the man said: “Yes I know that what I have done is a sin, I ask God’s forgiveness, but my heart is like a stone, I do not feel any sorrow for my sin, it is all just in my brain.” So St. John said to him: “Go out into the center of the church in front of the people and make a prostration before them and then come back to me.” As the man did this and knelt to ask forgiveness from the people before him, something broke inside his heart and it came alive again. Suddenly he felt real compunction for what he had done. He said “now it is different,” and the Archbishop gave him forgiveness.

That was the moment of turning for him because he acknowledged that his sin was a sin against the community and he asked their forgiveness. So in our confession let us first of all recall that dimension. We are also asking for forgiveness of our brothers and sisters for what we have done. That is one reason to go to confession, because sin is social.

There is a second reason. The spoken word, the uttered word has great force. This applies in two ways. First of all we listen to the spoken word of the priest, the council that he gives, and it may be that what he says if written down and put in a book would not seem so striking. It may be that it wouldn’t seem so remarkable.

But in confession the priest is praying and we are praying for the light of the Holy Spirit, and he is addressing those words under the guidance of the Holy Spirit to each one of us, to each penitent personally. The words which looked at in the abstract might seem obvious, common place, can prove words of fire when we realize that they are being said to me personally here and now under the inspiration of the Holy Spirit.

I can remember at the Russian convent in London many years ago there was a priest, Fr. John, who didn’t much like hearing confessions, he didn’t much like giving sermons either. He was a person of few words and very humble, and didn’t feel he really had the authority to offer counsel in confession, but he was blessed by the bishop to hear confessions so he did so. On one occasion a woman was telling him at immense length of her quarrels with her husband: “I said this and he said this and I told him he was wrong and told him this” and so it went on “and I told him this and this.” When she had finally stopped all Fr. John did was to turn to her and say “And did it help?” and then he gave her absolution.

That came as a sudden revelation to her, the futility of the endless arguments she had with her husband, of her endless desire to prove that she was right and that he was wrong. Suddenly she saw that there was no point to all this, it was quite simply unnecessary and she stopped from that moment.

So the uttered word can have great power and that applies also to what you or I utter when we make our confession. Yes we can confess our sins secretly in our evening prayers and we should do so, but when we come before the holy icons in church, when we have listened to the prayers and speak in the presence of the priest, when we have to say these things aloud, often then it becomes powerful, immediate, personally significant in a way it was not before.

The uttered word has great force and we find ourselves in confession, by God’s grace, saying things that we never said in our private prayers. Suddenly we are able to understand more deeply and to express it more openly. Therein lies much of the grace of confession. The desert fathers say that a thought which is concealed has great power over us, but if we can find a way to bring it into the open and to speak of it, it loses its power. That is also what the modern psychiatrists tell us, but the desert fathers said it first! So, the uttered word that we bring in confession can have a sacramental force and a healing grace which will surprise us.

But then there is a third thing, not just what the priest does when he offers advice, not just what we do when we try to speak the truth in Christ. There is also what Christ does. Confession is a mystery of the Church that confers sacramental grace, there is power within it, Divine power. When the priest lays his hand upon our head in Confession, it is Christ who lays his hand upon us, Christ who forgives and that is certainly the deepest and most profound reason why we should go to Confession. When such grace and such healing is offered to us, who among us dare refuse to accept such an opportunity.

Bishop Kallistos Ware is Spalding Lecturer of Eastern Orthodox Studies at the University of Oxford. The author of many books and translations, he is perhaps best known for The Orthodox Church, the most recent revision of which was published by Penguin Books in 1993,and The Orthodox Way, recently issued in a revised edition by St. Vladimir’s Seminary Press. He is a member of the advisory board of the Orthodox Peace Fellowship. His sermon was given at the parish of St. John of Kronstadt in Bath, England, the town in which he grew up.