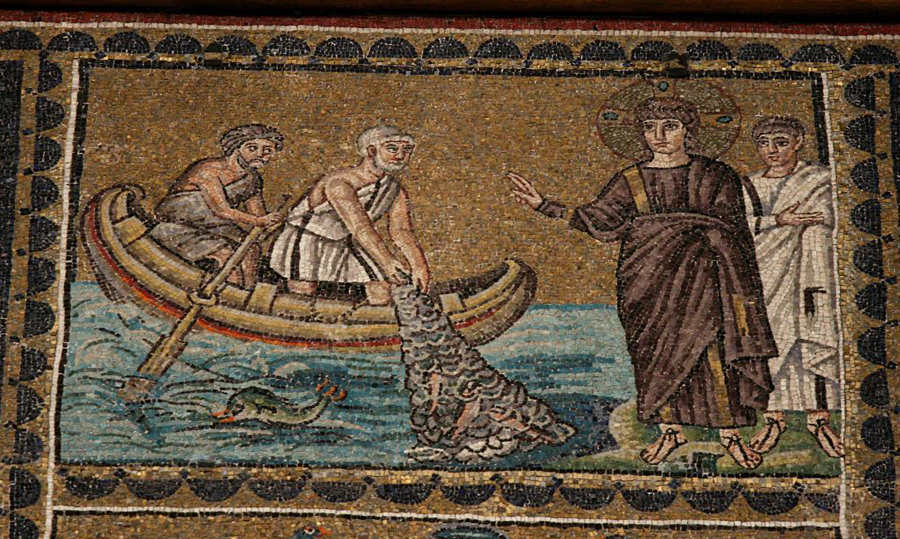 GOSPEL: MATTHEW4:18–23
And Jesus, walking by the Sea of Galilee, saw two brothers, Simon called Peter, and Andrew his brother, casting a net into the sea; for they were fishermen. Then He said to them, “Follow Me, and I will make you fishers of men.”
They immediately left their nets and followed Him. Going on from there, He saw two other brothers, James the son of Zebedee, and John his brother, in the boat with Zebedee their father, mending their nets. He called them, and
immediately they left the boat and their father, and followed Him. And Jesus went about all Galilee, teaching in their synagogues, preaching the gospel of the kingdom, and healing all kinds of sickness and all kinds of disease
among the people.

In this Gospel account, we hear how the first disciples were called. It is interesting to note the occupation of those earliest apostles chosen by Jesus Christ. He does not gather men who are
necessarily well-versed in scripture and law or of high standing in the temple. Rather, He chooses simple fishermen who likely lacked any formal education. Jesus is not looking for perfect people to
serve Him, but rather He chooses the unlikely to be made perfect through Him. His call to “follow Me” is not just meant for the early disciples but for all Christians of every time and place.
It is also interesting to see how the Holy Apostle and Evangelist Matthew stresses in his gospel that the disciples’ response was quick and decisive, by using the word “immediately.” Putting off
following Christ’s call was not an option for them and it should not be for us either, though we may be called to serve the Lord in a much different way than His first disciples.

FINAL THOUGHT:
The dismissal, “Let us go forth in peace,” sends each believer out on a mission to the world in which he or she lives and works to witness to others—not through words—but by what they are.—Ion Bria

A CLOSING PRAYER:
Blessed are You, O Christ our God, who revealed the fishermen as most wise by sending them the Holy Spirit; through them You caught the entire world. Loving Master, glory to You. — Tropar of Pentecost