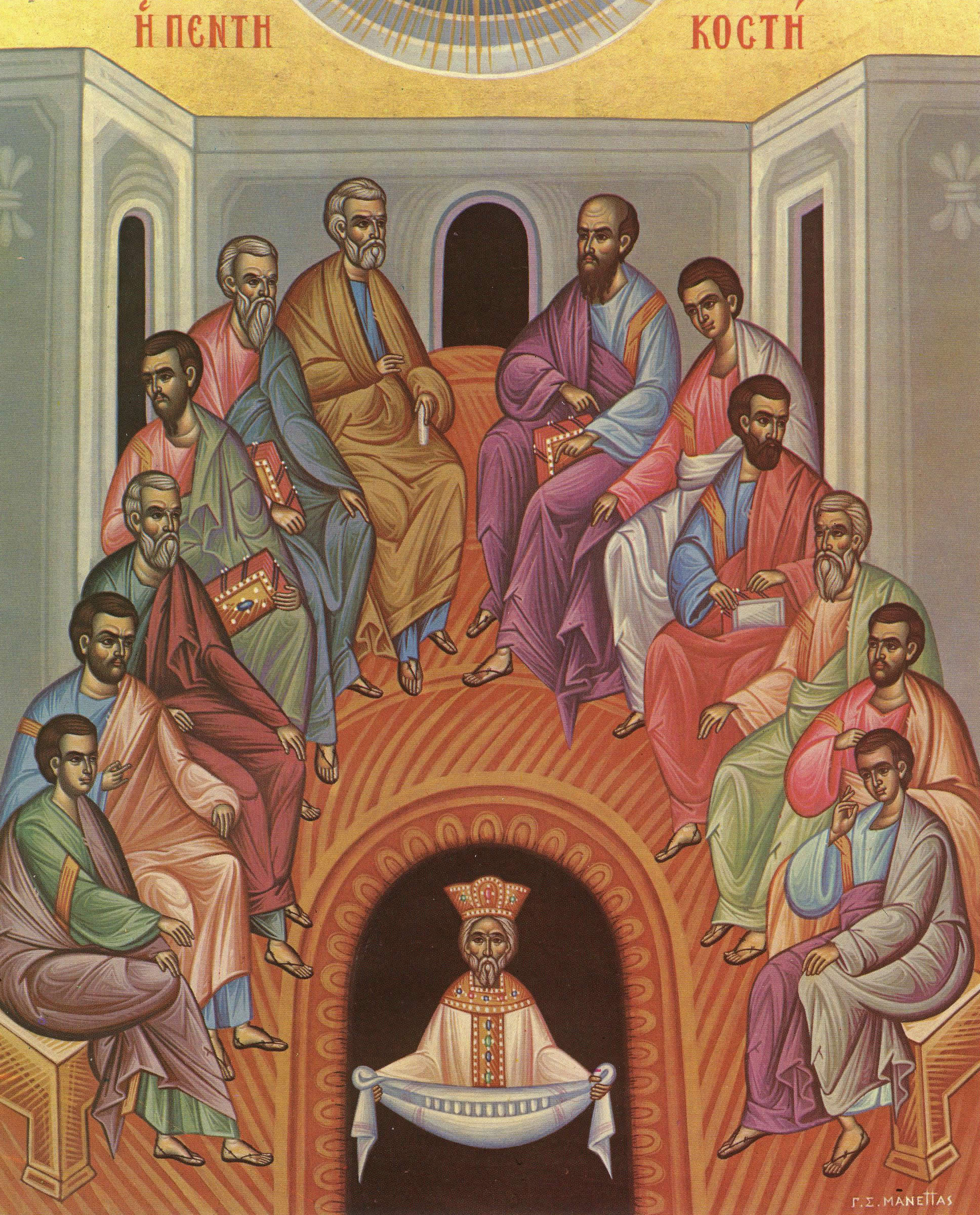 The Feast of Holy Pentecost is celebrated each year on the fiftieth day after the Great and Holy Feast of Pascha (Easter) and ten days after the Feast of the Ascension of Christ. The Feast is always celebrated on a Sunday.

The Feast commemorates the descent of the Holy Spirit upon the Apostles on the day of Pentecost, a feast of the Jewish tradition. It also celebrates the establishment of the Church through the preaching of the Apostles and the baptism of the thousands who on that day believed in the Gospel message of salvation through Jesus Christ. The Feast is also seen as the culmination of the revelation of the Holy Trinity.

The story of Pentecost is found in the book of The Acts of the Apostles. In Chapter two we are told that the Apostles of our Lord were gathered together in one place. Suddenly, a sound came

from heaven like a rushing wind, filling the entire house where they were sitting. Then, tongues of fire appeared, and one sat upon each one of Apostles. They were all filled with the Holy Spirit and began to speak in other languages as directed by the Spirit (Acts 2:1-4).

This miraculous event occurred on the Jewish Feast of Pentecost, celebrated by the Jews on the fiftieth day after the Passover as the culmination of the Feast of Weeks (Exodus 34:22; Deuteronomy 16:10). The Feast of Weeks began on the third day after the Passover with the presentation of the first harvest sheaves to God, and it concluded on Pentecost with the offering of two loaves of unleavened bread, representing the first products of the harvest (Leviticus 23:17-20; Deuteronomy 16:9-10).

Since the Jewish Feast of Pentecost was a great pilgrimage feast, many people from throughout the Roman Empire were gathered in Jerusalem on this day. When the people in Jerusalem heard the sound, they came together and heard their own languages being spoken by the Apostles (Acts 2:5-6). The people were amazed, knowing that some of those speaking were Galileans, and not men who would normally speak many different languages. They wondered what this meant, and some even thought the Apostles were drunk (Acts 2:7-13).

Peter, hearing these remarks, stood up and addressed the crowd. He preached to the people regarding the Old Testament prophecies about the coming of the Holy Spirit. He spoke about Jesus Christ and His death and glorious Resurrection. Great conviction fell upon the people, and they asked the Apostles, “What shall we do?” Peter said to them, “Repent, and let every one of you be baptized in the name of Jesus Christ for the remission of sins; and you shall receive the gift of the Holy Spirit” (Acts 2:38-39).

The Bible records that on that day about three thousand were baptized. Following, the book of Acts states that the newly baptized continued daily to hear the teaching of the Apostles, as the early Christians met together for fellowship, the breaking of bread, and for prayer. Many wonderful signs and miracles were done through the Apostles, and the Lord added to the Church daily those who were being saved (Acts 2:42-47).

Icon of the Feast

The icon of the Feast of Pentecost is known as “The Descent of the Holy Spirit”. It is an icon of bold colors of red and gold signifying that this is a great event. The movement of the icon is from the top to the bottom. At the top of the icon is a semicircle with rays coming from it (1). The rays are pointing toward the Apostles, and the tongues of fire are seen descending upon each one of them signifying the descent of the Holy Spirit (2).

The building in the background of the icon represents the upper room where the Disciples of Christ gathered after the Ascension. The Apostles are shown seated in a semicircle which shows the unity of the Church (3). Included in the group of the Apostles is Saint Paul (4), who, though not present with the others on the day of Pentecost, became an Apostle of the Church and the greatest missionary. Also included are the four Evangelists—Matthew, Mark (5), Luke (6), and John—holding books of the Gospel, while the other Apostles are holding scrolls that represent the teaching authority given to them by Christ.

In the center of the icon below the Apostles, a royal figure is seen against a dark background. This is a symbolic figure, Cosmos, representing the people of the world living in darkness and sin, and involved in pagan worship (7). However, the figure carries in his hands a cloth containing scrolls which represent the teaching of the Apostles (8). The tradition of the Church holds that the Apostles carried the message of the Gospel to all parts of the world.

Celebration of the Feast of Pentecost

This great Feast of the Church is celebrated with the Divine Liturgy of Saint John Chrysostom on the Sunday that is the fiftieth day after the celebration of Pascha. The Liturgy is conducted on the day of the Feast, and is preceded the evening before by a Great Vespers service and on the morning of the Feast by the Matins service. On the day of the Feast a Vespers service is conducted that includes the kneeling prayers. These prayers mark the beginning of the practice of kneeling during the Liturgy at the time when the holy gifts of bread and wine are consecrated as the body and blood of Christ. The practice of kneeling has been suspended during the Paschal season. On the Monday following the Feast, the Divine Liturgy is conducted in commemoration of the All-holy and Life-creating and All-powerful Spirit, Who is God, and One of the Trinity, and of one honor and one essence and one glory with the Father and the Son (From the Synaxarion of the Feast).

Prayer of the Holy Spirit:

Heavenly King, Advocate, Spirit of Truth, Who are everywhere present and fill all things, Treasury of Blessings, Bestower of Life, come and dwell within us; cleanse us of all that defiles us, and, O Good One, save our souls.

Hymns of the Feast

Troparion (Tone Four)
Blessed are You, O Christ our God, who revealed the fishermen as most wise by sending them the Holy Spirit; through them You caught the entire world. Loving Master, glory to You.

Kontakion (Tone Four)
When the Most High came down and confused the tongues, He parted the nations. When He divided the tongues of fire, He called all to unity; thus with one voice we glorify the all-Holy Spirit.