“Holiness United God’s People”: In Kiev, and Beyond, A New “Patriarch”… A New Epoch 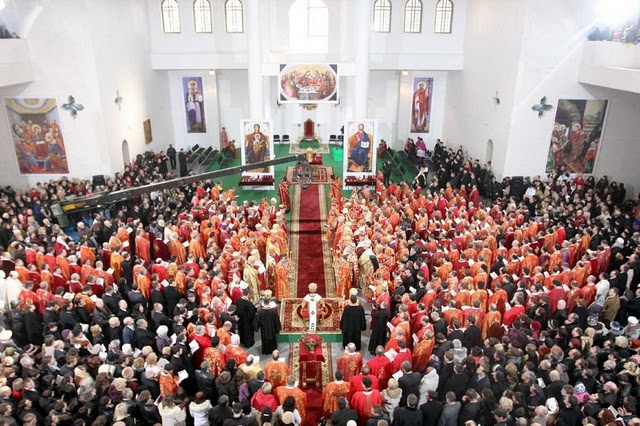 Even before its full picture would become clear, this morning in Ukraine’s capital promised to make for a striking scene, as a living head of global Catholicism’s second-largest branch watched the reins pass to his successor for the first time in centuries.

Given the Synod’s choice of its youngest member to lead the 6 million-member church, however, the moment became all the more one for the books.

Like their Orthodox counterparts, the rank of a Greek-Catholic hierarch is distinguishable by the number of bars that adorn the base of their ormophrion — the stole worn atop their robes. Three bars designate a bishop, metropolitans have four, with five reserved to the church’s head alone. 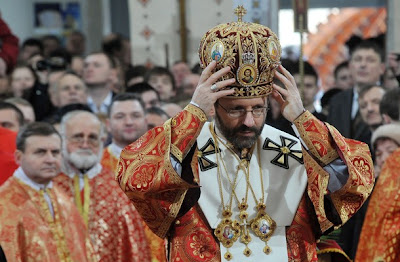 Still short of his 41st birthday, as Major-Archbishop Sviatoslav Shevchuk was invested with the symbol of his new office under the dome of a still-rising cathedral in the region’s birthplace of Christianity, the standing-room crowd of faithful crammed into every inch of the massive space and the unfinished church still glittered. Yet hovering over it all, a powerful message resounded, less of a new day than a new epoch — a reign likely to extend to the midway point of this century.

In picking a leader who was just starting seminary as the long-persecuted UGCC emerged from the underground and its leadership returned home from exile, the bishops of the Catholic world’s biggest non-Latin fold voted to recast the template at the helm of their church, and dramatically so. On its canonical territory, the “transitional” generation of Ukrainian eparchs who ministered through the years of the church’s public reestablishment there have been passed over in favor of a decisive option for the future and long-term consistency as the church’s rebuilding continues on its native turf. And further beyond, the selection of the pastor of Argentina’s 300,000 UGCC faithful signals both an open hand to the church’s diaspora — home to the majority of its membership — and with the Lviv native’s rise, a choice able to unite its domestic and overseas factions. 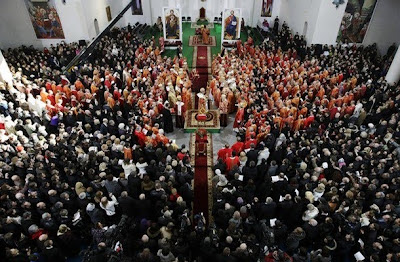 Above all, though, the Synod tapped a figure who’s rapidly become one of its brightest lights. Fluent in seven languages, a summa cum laude theologian from a Roman university, former head of the Patriarchal Curia and popular preacher known for his prodigious work-ethic, the successor to Cardinal Lubomyr Husar represents fairly equal degrees of continuity and change. Yet unlike a de facto “patriarch” destined for a shorter reign, by picking their junior hierarch to lead the country’s third-largest Christian community, Shevchuk’s confreres have made their man a force to be reckoned with — and not merely within the region, nor just along the center of the Catholic-Orthodox axis.

In a global fold that places a heavy premium on seniority, relatively speaking, it won’t be too much time before the new UGCC chief becomes the longest-standing top leader in the Catholic world, all told. And even then, he’ll still be shy of 60, with over two decades of voting eligibility in a Roman conclave still ahead of him. But what’s more, with the venerable Husar freshly turned 78 — just one of a glut of cardinals set to lose their electoral rights on reaching their 80th birthdays over the next two years — his heir could receive the post’s traditional red hat as soon as age 42, five years ahead of the youngest cardinal of the modern era, and no less than a decade and a half faster than the junior member of today’s papal “senate.” 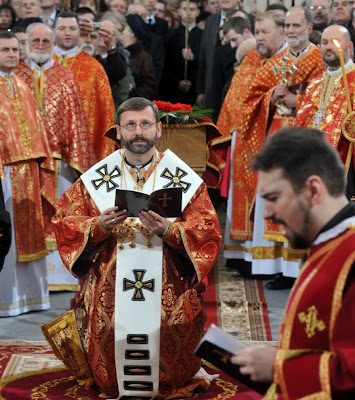 Ordained a bishop less than two years ago, while Shevchuk’s qualifications on paper were already well-burnished, his lack of seasoning in high office apparently pushed the Synod’s deliberations to their final day.

The young star could’ve been made to ride out an elder cleric’s brief reign. But so it seems, a majority of the hierarchs had found their man of the future, and they saw no sufficient reason to delay his launch any longer.

Fresh from his shocking upset of the leadership’s more established figures, the four metropolitans Shevchuk now oversees will accompany the new major-archbishop to Rome later this week, where he’ll be welcomed by Pope Benedict and briefed at the Congregation for the Oriental Churches.

In the meanwhile, with Eastern Christianity observing “Cross Sunday” — the midway point of its Great Lent — here below is a rough translation of the new Ukrainian chief’s inaugural talk, given at this morning’s hierarchical Divine Liturgy of Enthronement. 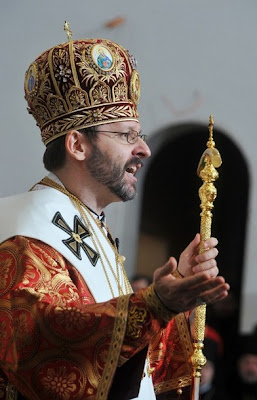 Beloved in Christ, brothers and sisters!

“We praise your Cross, Lord, and glorify Your holy resurrection!”

With these words today, the Church of Christ focuses on the Honest and True Cross. Today, as we pass the halfway point of our Lenten journey, the Life-Giving Tree is given to us, that we might find in it a source of strength and courage to go on to the Resurrection, to put the Sign of the Cross at the center of our lives.

In his Epistle to the Philippians, St Paul has left us a unique early Christian hymn that a young Church, newly enlivened by the Holy Spirit, solemnly sang in its Liturgy.

The Apostle calls to us this way:

Have among yourselves the same attitude that is also yours in Christ Jesus,
Who, though he was in the form of God, did not regard equality with God, something to be grasped.
Rather, he emptied himself, taking the form of a slave, coming in human likeness; and found human in appearance,
he humbled himself, becoming obedient to death, even death on a cross.
Because of this, God greatly exalted him and bestowed on him the name that is above every name,
that at the name of Jesus every knee should bend, of those in heaven and on earth and under the earth,
and every tongue confess that Jesus Christ is Lord, to the glory of God the Father (2:6-11).

In these words, the word of the Cross is central. Here, on the one hand, we see an icon of the earthly life of Jesus Christ — his everyday humanity en route to his death on the cross. But the Cross is the greatest moment of his humiliation, extreme humility and divine self-giving. In the second part of this hymn, however, we see Christ, who glorifies the Father. That from the death of the Cross begins the Resurrection — the praise and triumphant discovery of his divine glory, which is the glory of the Father.

As a disciple of Christ, every Christian who follows his Lord must witness in their personal lives to the effectiveness of his paschal mystery. Only in the celestial glory of the Resurrection can one enter through its only door, through His honest and True Cross. Our vocation is to follow the Savior to the end, even until the death of the Cross. His True Cross is the lowest degree of humility and obedient disgrace, but it is exactly the place from which the Father proceeds to raise him, that we might praise the divine glory which lay before the knee that bends in heaven, on earth, and under the earth. 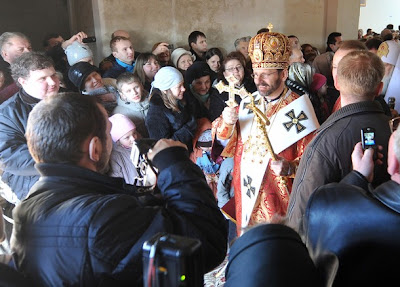 “We praise Your Cross Lord, and glorify Your holy resurrection!”

These words come as a special sound to us today! For us, the martyrs of the Church — which is true inheritor of the faith of the apostles — sing them in this Patriarchal Cathedral of the Resurrection! Is this not an eloquent sign of God for all of us?

Our Church in the twentieth century has walked with our Savior to the end — until the total destruction, and seeming death, of their native land. However, the death of hundreds of thousands of our laity, priests, monks and nuns, led by our bishops, was death on a cross, and therefore the giver of life! Our parents, grandparents and great-grandparents thus make known to us, their descendants, and through us — a free Ukraine, the strength and invincibility of the Holy and the True Cross. In its slavery, humiliation and self-giving, our church was brought to this place: the place of resurrection, where the Father glorified it and raised up its imperishable glory, a glory that was there before it always, that every tongue, through the power of the Church’s testimony in the Holy Spirit, confess that Jesus Christ is Lord, to the glory of God the Father.

“We worship Your Cross Lord, and glorify Your holy resurrection! 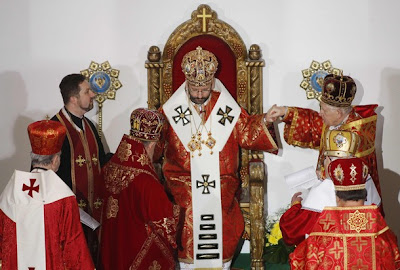 For me, a young father and head of the Ukrainian Greek Catholic Church, these words are a result of their past and current meaning, and guidance for the future.

Today, we are heirs of Volodymyr’s Baptism, we feel the unity and continuity with our history and tradition, adopting the precious heritage of our great predecessors: Servant of God Metropolitan Sheptytsky, Patriarch Joseph (Slipyj), and Myroslav Ivan (Lubachivsky), and Lubomyr (Husar). Today, these men, most cherished Lubomyr, bless us that we might make this treasure an alive and eloquent witness for the Ukraine of today. “Holiness united the people of God” is and will be the strategy of our Church.

She lives and acts as one body in the world, as the church, on a universal scale — it is the soul and will of the Ukrainian people to be made holy, to open its heart to its brothers and neighbors, to preserve our nation as people of God and lead it to salvation and eternal life. 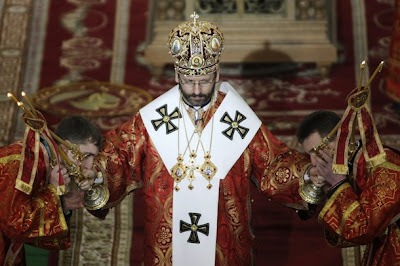 Today we are experiencing a new spring of our Church, which in its resurrection by the Holy Spirit begins to get younger and smile anew to the world with the light of Christ’s Gospel. For her, the ancient and eternally new, sings psalms, saying: she “fills your days with good things, and renews your youth as the eagle’s” (Ps. 102.5). Today, especially on this festive day, let us realize anew that we are renewed and rejuvenated by the Church. So I want to especially appeal to our mostly still young clergy, religious, and the entire Ukrainian youth! Today, Christ calls us, the young, to account for His Church! Let us embrace it, put the Honest and True Cross of our Savior in the center of our lives and bring Him forward as Moses’ rod brought forward sweet water in the desert! Let us boldly carry out our Christian vocation in the world and together we can renew the face of our nation and its state.

“We praise Thy passion, O Christ, your appearance and your glorious resurrection!”

SVILUPPO: Video from the rites has been posted.

Source: Whispers in the Loggia