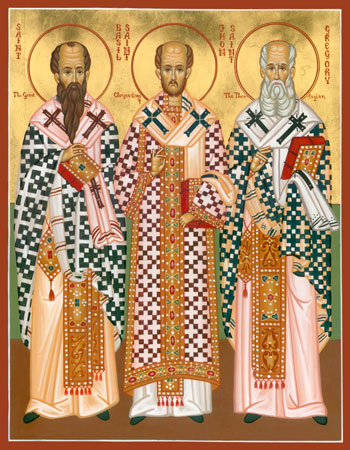 Each of these saints have their own feast day. St. Basil the Great, January 1; St. Gregory the Theologian, January 25; and St. John Chrysostom, January 27. This combined feast day, January 30, was instituted in the eleventh century during the reign of Emperor Alexius Comnenus. At one time a debate arose among the people concerning who of the three is the greatest? Some extolled Basil because of his purity and courage; others extolled Gregory for his unequaled depth and lofty mind in theology; still others extolled Chrysostom because of his eloquence and clarity in expounding the Faith. Thus some were called Basilians, others Gregorgians, and the third were called Johannites. This debate was settled by Divine Providence to the benefit of the Church and to an even greater glory of the three saints. Bishop John of Euchaita (June 14) had a vision in a dream: At first, all three of these saints appeared to him separately in great glory and indescribable beauty, and after that all three appeared together. They said to him, “As you see, we are one in God and there is nothing contradictory in us; neither is there a first or a second among us.” The saints also advised Bishop John that he write a common service for them and to order a common feast day of celebration. Following this wonderful vision, the debate was settled in this manner: January 30 would be designated as the common feast of these three hierarchs. The Greeks consider this feast not only an ecclesiastical feast but their greatest national school holiday.

From the, The Prologue from Ohrid