WHAT IS AN EASTERN CHURCH?

The Christian Church was born in the Holy Land, what we call the Middle East today. As it spread, the Church took on the ways of the nations which accepted it. In this country, most Christian churches are ‘western’ because their roots are in western Europe, and their ways reflect the culture of the German, Irish or Italian immigrants who founded them.

Some Canadian churches, including ours, were started by people from Eastern Europe or the Middle East. They still keep the ways of the Holy Land: Jerusalem, where Christ founded His Church; Antioch, where the name ‘Christian’ was first used; Damascus, where Saint Paul was converted. Because our ways reflect this Eastern culture, we are called ‘Eastern’ Churches.

At the time of the early Church, there were several rich cultures in the Middle East and each of them has given rise to a different church tradition. The faith from the middle east was brought north east to Bulgaria, Romania, Ukraine, Belorussia and Russia by Sts. Cyril and Methodius in 988. For this reason the traditions of this church reflect the Greek or Byzantine culture, along with the Ukrainian Slavic culture, and so we are called Ukrainian Greek Catholics or Ukrainian Catholics.

WHAT IS DISTINCTIVE ABOUT OUR TRADITION?

As Eastern Christians we have a particular style of Christian living all our own. We especially stress:

Our most important belief is that we are called “to become partakers of the divine nature” (2 Peter 1:4), not just to be ‘saved’ from sin. We see ourselves as invited to live the very life of God, to become intimately related to God, to be physically united to Christ and to have the Holy Spirit dwell within us! The Church Fathers saw this as the reason for Christ’s coming: “God became man so that man might become God” (St. Athanasius).

This relationship comes about when we receive in faith the Holy Mysteries (what western Churches call sacraments). In Baptism we are made one with Christ as we reenact His burial and resurrection. This reliving takes place when we are buried (immersed) into the water and are raised from it. We immediately receive the gift of the Holy Spirit, “the first of God’s gifts” (Romans 8:23) in Chrismation (Confirmation) . In receiving the Eucharist, we recognize that our mortal bodies are united to the Body and Blood of Christ as a token of the life to come, when they shall be united to Him in glory forever. Thus we see these Mysteries, not merely as pious devotions, but as encounters with God, actually producing the effects
they symbolize.

As members of God’s family, we belong to one another, and so we live an active Community Life as Church. Most importantly, we join one another in worship. Our style of worship in the Eastern Churches reflects the presence of the risen Christ among us in glory and joy. All the senses take part in our worship to express this glory. We see icons, vestments, candles; we smell incense and perfumes; we hear continual singing; we taste blessed foods and use physical gestures such
as bowing, prostrating and crossing ourselves to express our wonder at the glory of God.

Another important aspect of our community life is our Joy in Each Other’s Company, expressed in the frequent meals and social times we share. Finally, we open ourselves to Support One Another in the trials of daily life. In this way the unity we celebrate at the Eucharist is lived out day by day.

Besides this public Christian life, the Eastern Churches also stress a Personal Spiritual Life “in secret, so that your Father, who sees all in secret, will reward you” (Matthew 6:6) . Chief of these is Personal Prayer in the silence of our own hearts, where we can speak honestly with God. Thus one of the most popular prayers in the Christian East is the so called ‘Jesus Prayer’, which sums up our need for God’s love: “Lord Jesus Christ, Son of God, have mercy on me a sinner”.

In addition, Eastern Christians are called to Fast and to Share Their Goods in secret as Jesus commanded (cf. Matthew 6:1-8). By refusing to gratify ourselves endlessly whenever we want, we reflect our need to continue our conversion day by day.

Though we are called to be divinized, we realize that this process is long: “The gate is narrow and the way is hard that leads to life” (Matthew 7:14). The most difficult obstacle to our growth is the weakness and brokenness of our personalities. This is why the Eastern Churches call on their members to engage in a Spiritual Warfare in the arena of their hearts, learning to subject their weaknesses to the divinizing power of the Holy Spirit working within them. Eastern Christians are urged to conduct this warfare with the help of a Spiritual Guide. Counseling, then, is not something for those with problems, but for all of us who seek to grow in our relationship with God.

All these beliefs and practices date from the earliest days of Christianity in the Holy Land. By continuing to observe them, we maintain a living connection with the early Church. We cherish our Tradition as a continuous stream flowing from the first Christians to us under the guidance of the Holy Spirit: truly the ‘old time religion’ in a new land.

THE EASTERN CHURCHES TODAY:
The Eastern Churches today belong to several different traditions and communions. The Catholic Communion embraces all the Eastern Catholic Churches and the Roman Catholic Church. The Eastern Orthodox Churches (Greek, Russian, Antiochian, etc.) form a second communion following the Byzantine rite and acknowledging the seven ecumenical councils of the first millennium. The Oriental Orthodox Churches of the Armenian, Coptic, and Syriac traditions make up a third communion, acknowledging only three ecumenical councils. The Church of the East has not been in communion with any of these Churches since the fifth century, but has a fraternal relationship with the Catholic Churches, particularly
the Chaldean Church. We can also group these Churches according to their spiritual and liturgical traditions:

Byzantine Tradition:
The Eastern Orthodox Churches, with 14 autocephalous Churches and an equal number of autonomous
Churches 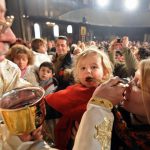 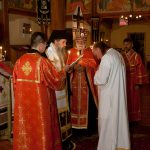 Fr. Mark M. Morozowich, Dean of the School of Theology and Religious Studies at The Catholic University of America to talk about the Eastern Rite of the Church.